Down with the Floors, Up with the Greenhouse 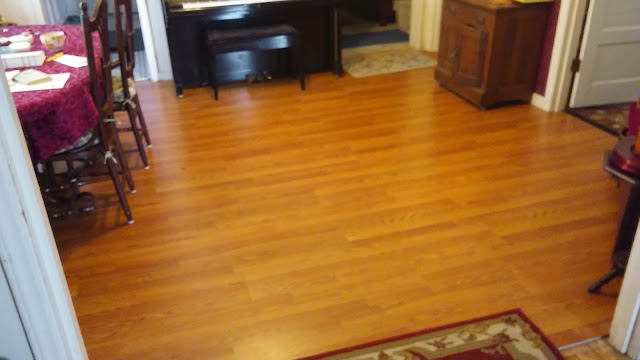 Adam finished the dining room floor a couple of days ago, and it looks marvelous. I'm quite proud of him. It was not altogether easy because there are so many openings from this room, and the videos he watched didn't tell him everything he needed to know. But he's a problem-solver, and he got it done! And he didn't stop until he found a way to make it look great.
Now, however, he is thoroughly unhappy with the old wooden floors in the rest of the house. Sigh. 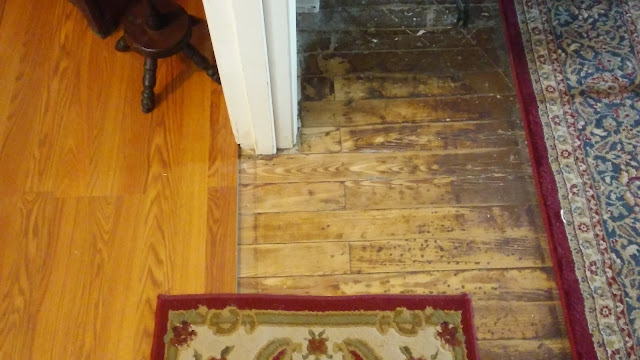 The contrast is rather stark :)
LLBean was having a massive sale. I had free coupons for merchandise from them, plus another coupon, plus the 25% off sale, so I went ahead and ordered the rug for the new floor. I was going to wait ... but ... 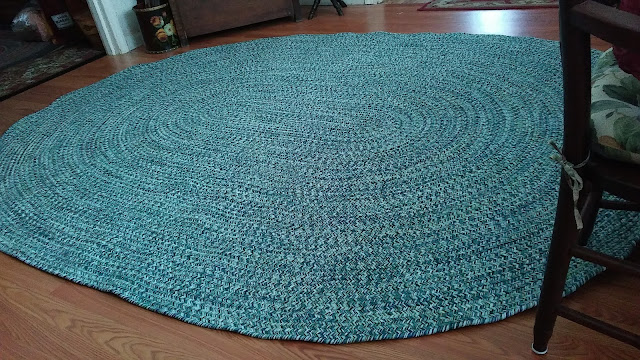 Adam says this is shockingly colorful for me, and he's right. I'd usually go for a nice, safe, boring brown. But I want this room to be a cool, summer blue, and the rug is the first step in that direction. It has shades of blue, green, and white in it.
At last, today Adam can get outside and do the work he's been longing to do: build the new greenhouse!
First metal hoop: 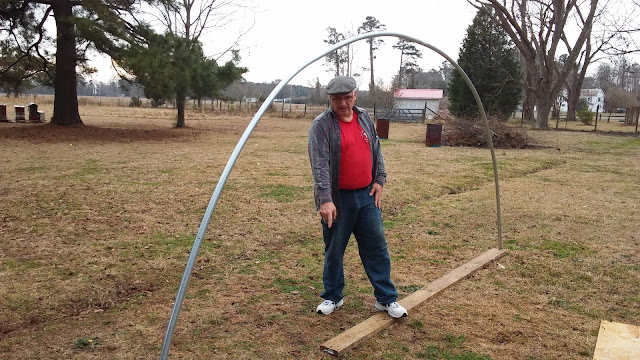 A piece of rebar keeps it in the ground. 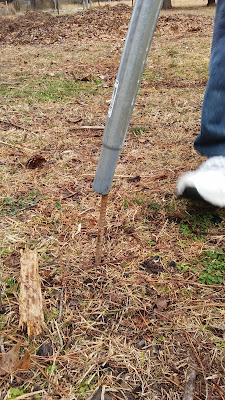 Adam built this jig/frame/don't know what you call it. This is for bending the metal poles into rounded hoops. 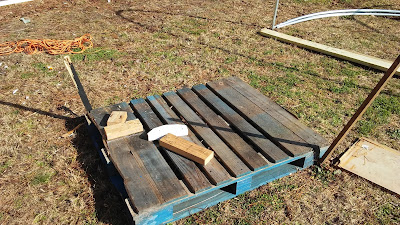 He lays part of the metal pole into that opening against the rounded piece of wood. Then he gently begins to press against it, forcing it to bend and round.  Two poles joined together make one hoop. 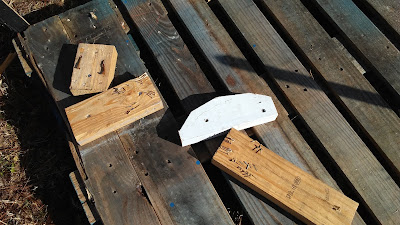 Here's the nice screen door for the greenhouse!!! He didn't make this; he bought it. But he's making the frame for it, and the rest of the building. 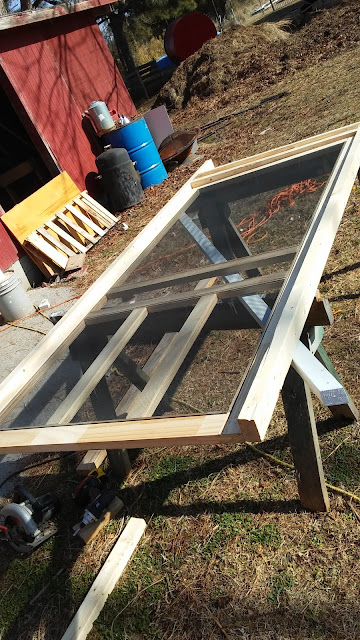 Beginning to stand things up for a dry fit. He'll finish everything here near the barn where he has electricity. Then he'll move it all to the garden and put it together permanently. 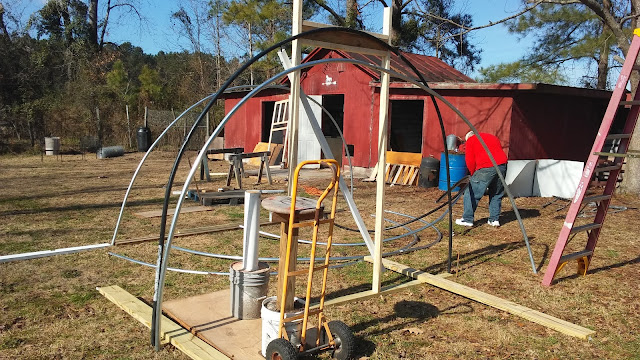 Yesterday he did me a huge favor and improved my chickens' lives. He made an opening in their fence so they could get into the orchard, and he closed off the opening that allowed Ned to get into the orchard. Now ... at last!! ... my chickens can peck and eat greenery and bugs and worms to their hearts' content! I'm so happy :)
From inside the orchard, here's a view of the new fence blocking Ned out (on the right) and the new opening where the chickens are coming through. 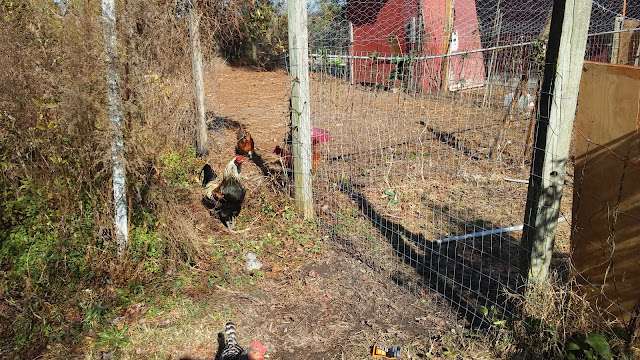 They mostly stay on the far end down there near their coop where the vegetation is overgrown and they have lots of cover from predators. Plus, Bernie the Roo keeps his eagle eye on them and is always watching for their safety. 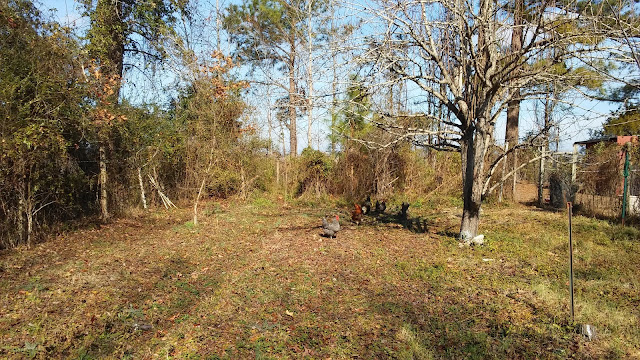 See how they blend in? 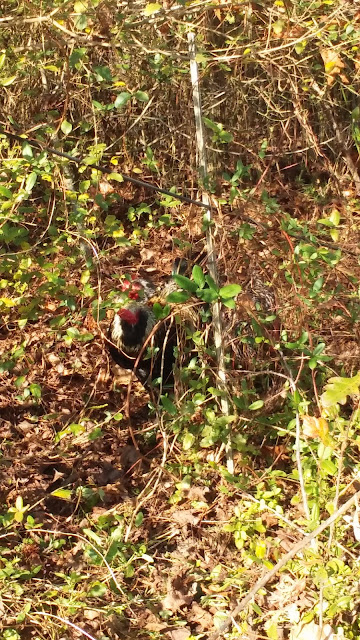 Other good news: my daffodil bulbs are coming up everywhere. Then, I dug around in my tiger lily bed and found new green coming up!! yay!! 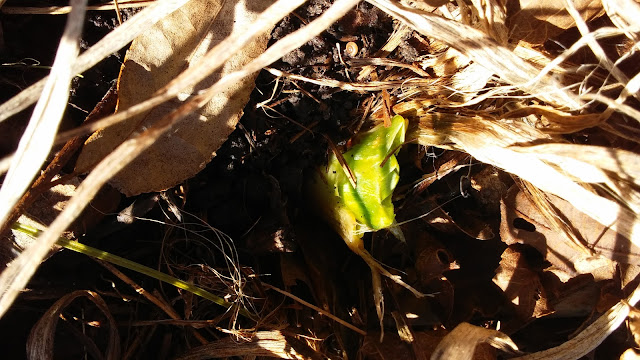 I should add that Adam returned the truck to its owner who needed it back. It was a generous loan for over a year and quite useful. In its stead he bought a wheelbarrow at the hardware store. 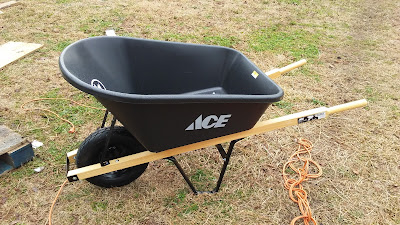 We wanted to buy him one for his last birthday but they were all over $200! A bit steep! But yesterday they had this one for only $49, so we're glad we waited.
That's all from the farm. Hopefully in the next post I'll be showing you the greenhouse in its new home.
Posted by M.K. at 3:57 AM