This morning I finished planting all the 57 tomato plants that will vine against the two long trellises. I enjoy this task. My small square spade slides into the dirt effortlessly as I press with a booted foot. It's a pleasant feeling to find loose, rich, ready soil. The bed is prepared, there's matted grass at hand to prevent weeds. I sprinkle a bit of organic fertilizer in the hole, gently press soil around the plant, and make it snug. Putting in five or ten tomato plants takes no time at all. 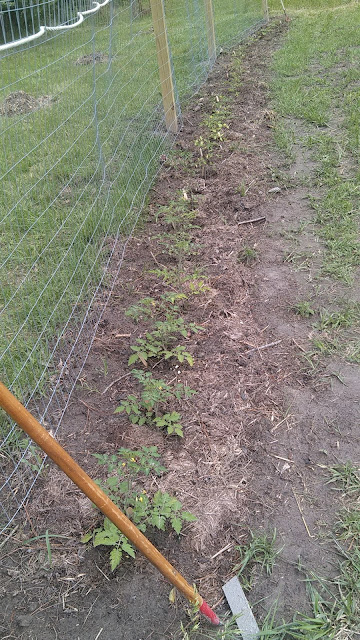 And that's because of Adam. He did all the prep. He worked the pasture soil before me: dig, double dig, incorporate compost (which he'd made all fall/winter), till, erect a massive trellis. I'd like to think he enjoys all that back-breaking work as much as I enjoy sprouting greenhouse seeds and transplanting them into the beds ... but I don't know that he does. He wants to be done with all the initial breaking of this sod in the next 2-3 years. It's hard work. 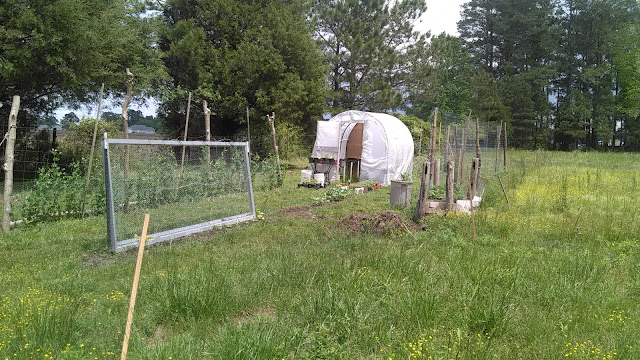 Still, I think we're a good pair. He strolled around the garden area with me this morning and several times said how happy, how proud he felt. "Proud of what?" I asked. "Proud of the garden? Me? Yourself?" "Of you," he replied. How sweet and encouraging that was! I didn't know how much (if at all) I would really assist him in this farming enterprise, but I've discovered I enjoy it a lot. He went to the grocery store this morning and when he returned I'd put in two hills of cucumbers, four hills of beans, two of cantaloupe, and two of zucchini. The last five tomato plants. Three squash. And he said, "This is starting to look like something!"

Clearly, what we have is a farm.

Farm: noun.  An area of land and its buildings used for growing crops and rearing animals typically under the control of one owner or manager.

However, we're not yet farming.

My brother and sister-in-law are farmers. And it's Adam's goal eventually to do just that -- to live off of what we do here. It may take many years. So as we learn and progress, at some point we'll look at each other and say, "Hey, I think we're farmers now." And we would have done it together, he with his skills and I with mine. It's so pleasant that they complement each other.