That's a mighty title! Our new farm year plans are not impressive ones, but we are excited! I can't wait to have the new, twice-as-big greenhouse. Adam says it should be ready for me to fiddle around in by the end of January. Yippee! Meanwhile ... 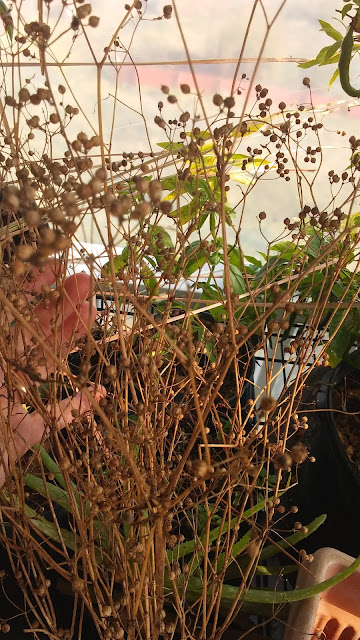 I remembered that I'd kept dried cilantro seeds (i.e., coriander) from the summer. Why not put some in soil and see what they do? Adam brought a bucket of nice compost/soil to the front porch. 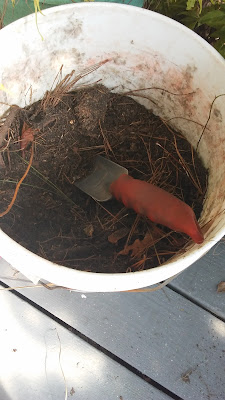 I grabbed a pot and put those seeds into the loose lovely soil. It felt just wonderful to have my fingers in the dirt again! 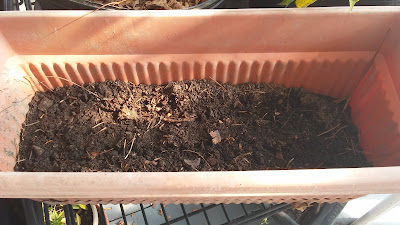 Also on the front porch are several basil plants. This is the healthiest: 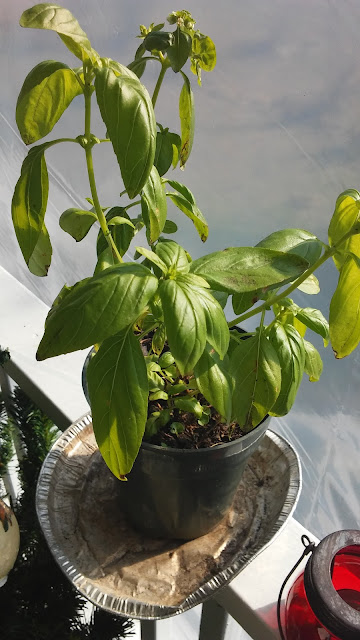 This morning at the breakfast table these two men put their heads together over a new method for growing tomatoes. Peter learned it in the summer at the farm where he worked, a system with posts and cabling. He's diagramming it for Adam. 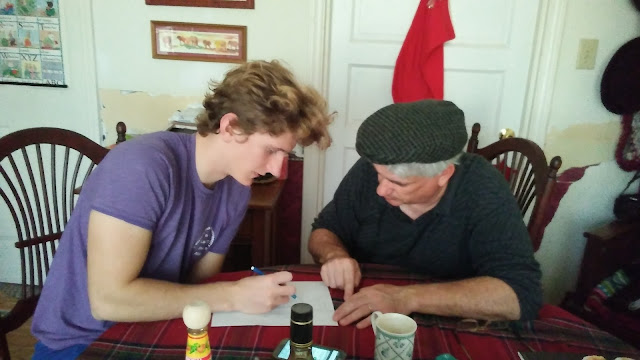 And so we can remember -- this is the year when Peter is growing his hair out quite long. He wants the front hair long enough for a pony tail. His front hair is massive, but his hair is curly and it piles up instead of hanging long. I can't wait to see how long he goes with this, until he gets sick of it and cuts it all off.
On Monday the menfolk did what menfolk do best. They worked outside with large tools, wrangling nature around and doing stupid stuff. 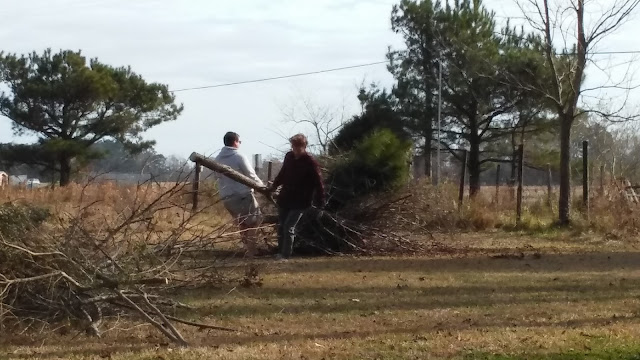 Adam had cut the trees in the lot around the little out-building. The boys hauled them over. 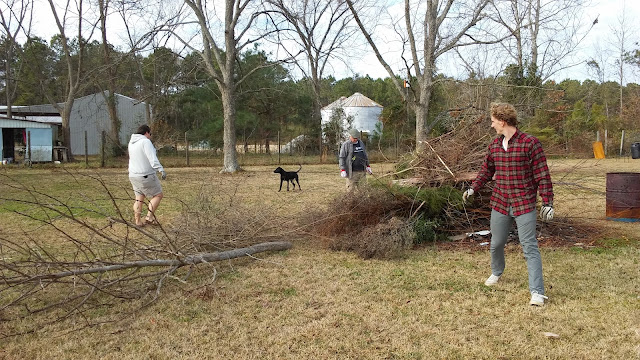 Plans were made for a large fire. 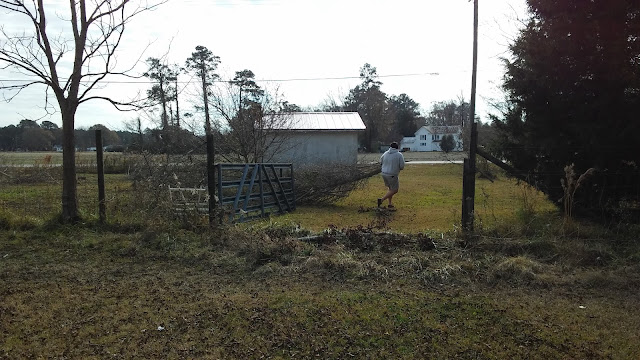 Adam's been watching youtube videos again -- you know the type of videos: 16 year old geeks trying stupid stuff in their parents' basements. He wants to have a sort of forge. He asked me to buy a blow dryer at the local thrift store. He then taped a pipe to the end, wrapping lots of electrical tape around it to make a tight fit. 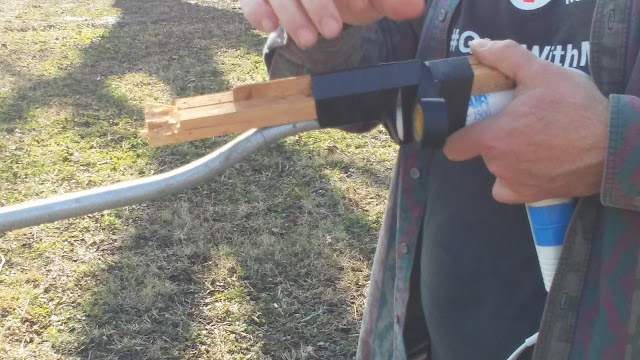 He was unaware that there was a blockage in the pipe, so it didn't work. 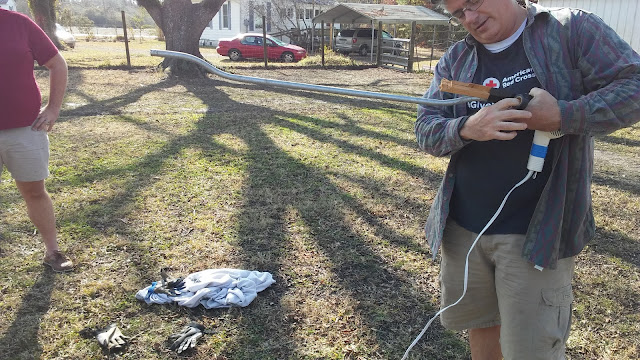 He dumped the metal pipe and went for a bigger PVC pipe. 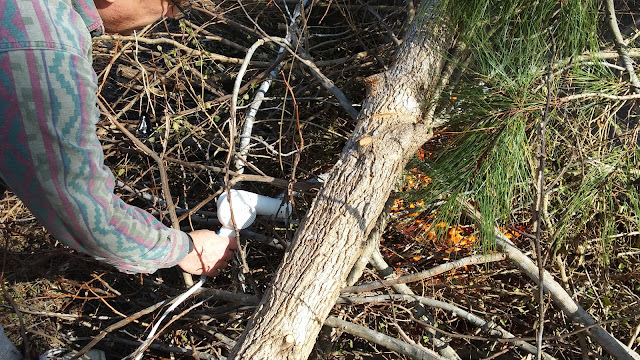 The brush was rather green and wouldn't burn well. The blast of air did indeed make it burn vigorously. 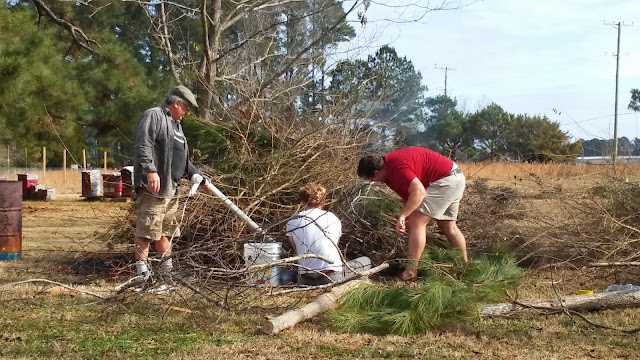 When he saw that the idea was valid, Adam opted for his leaf blower to get more power. 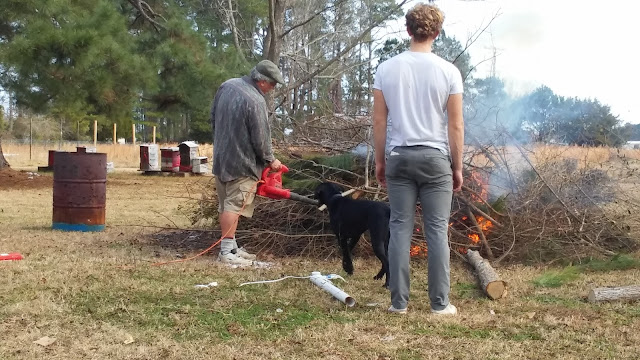 They succeeded in burning out a big hole in the middle of the pile of brush, but couldn't get it lit before Adam had to come inside and make lunch. I imagine we have not heard the end of this idea yet -- running a big electrical tool in order to make stuff burn. Hmm.
Today Adam will work on the herb bed border some more. We have volunteer parsley popping up, which is fun. Not sure if it will survive the rest of the winter! But I'm finding this light farming habit quite delightful. I've never looked forward to spring before this much. Chaio!!
Posted by M.K. at 9:44 AM