So much is happening on the farm right now because it's about 80 degrees (for today, anyway), and one must "make hay while the sun shines," right? While I was gone to West Virginia, Adam and Julia painted the dining room a lovely pale blue. 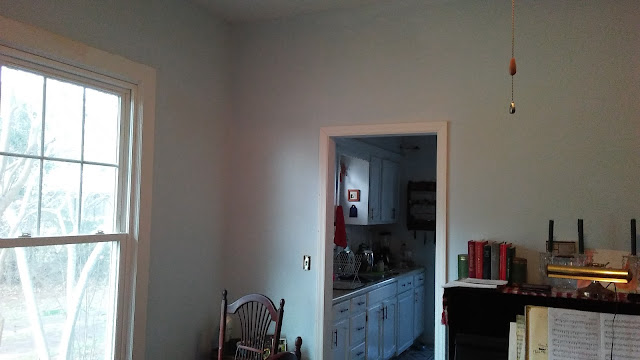 This house is nearly 100 years old, and the walls and floors are wonky. Plus, the walls were in bad shape with tough wall paper to be removed and lots of prep work. There's still trim painting and touch up to be done, but the basic paint job is complete, and I love it! It's so cool and calming and clean. 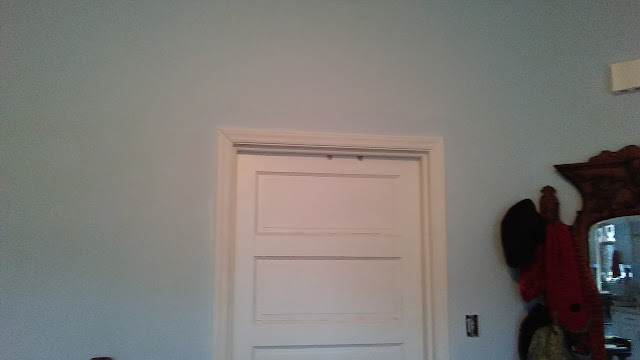 Outside, the big news is that we (once again!) have a new dog. Her name is Baby. She is a mix and we adopted her from some friends of Julia who could no longer keep her. We think she's a mix of Rottweiler and hound ... maybe. She's not quite a year old. She makes a good companion for Ned; they play all day long. 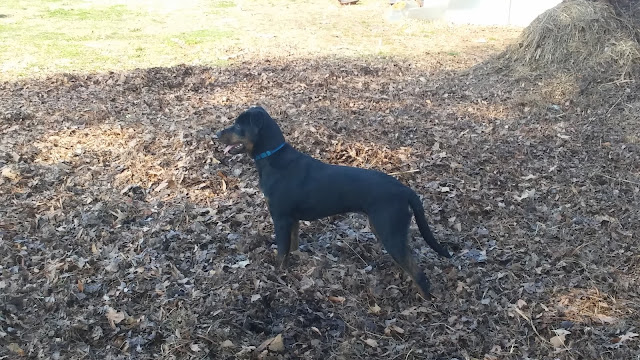 Baby will be outside only and sleep in the barn office with Ned.

The Japanese magnolia is blooming now. 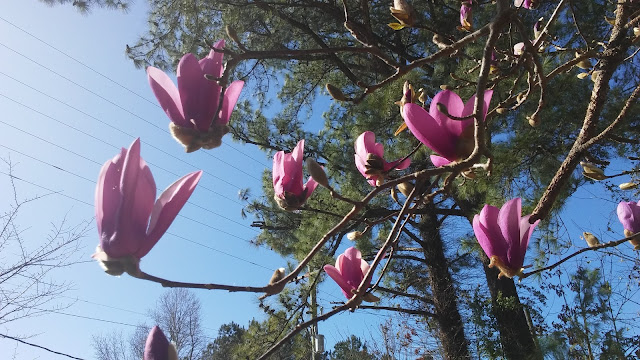 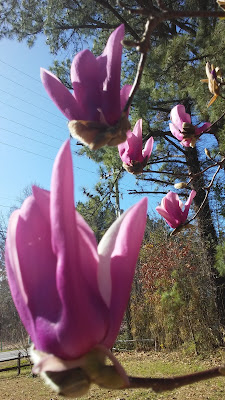 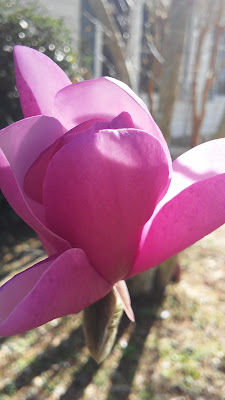 And the camellia bush is heavy-laden. 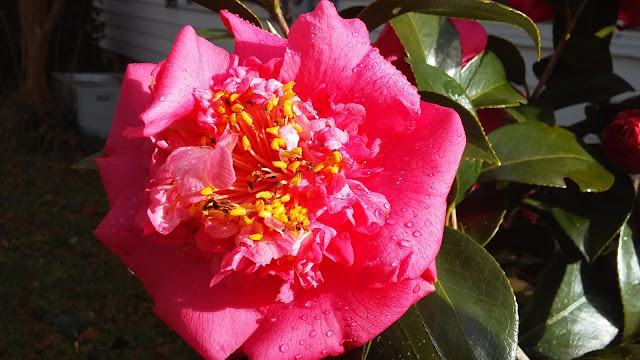 I'm thrilled to say that at long last I spent my first blissful morning in the hoop house. Adam got my shelves up. These are taller than last year, so please note the blocks under the legs: 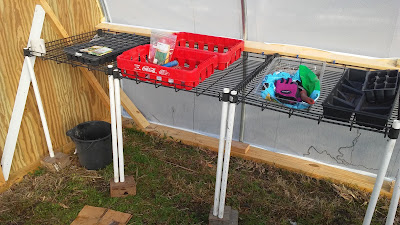 He brought me a massive tub of his very own homemade soil!!! 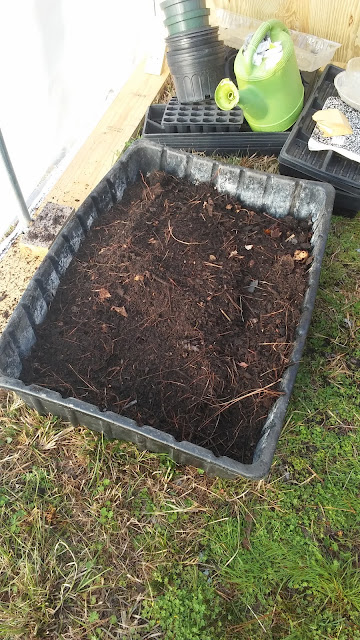 That's made of worm castings and compost. Lovely stuff.
He brought me buckets of water too. I put lots of heirloom tomato seeds in dirt first, plus some luffa gourds, and (just to experiment) some rosemary. I've never tried rosemary from seed before. I've heard it's hard to do. But I had grand success with my other herbs last year, so why not? 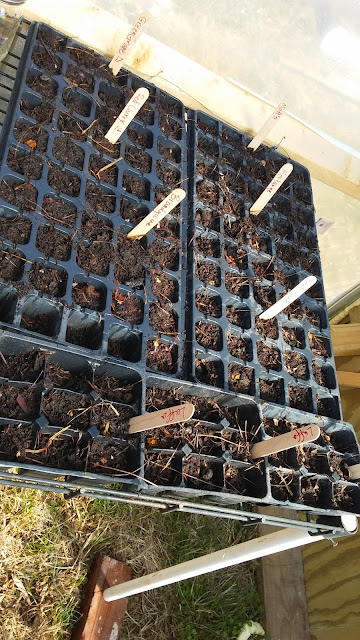 Some of those tomatoes are Brandywines, Beefsteaks, Matts Wild Cherries, Small Red Cherries, and Mortgage Lifters. 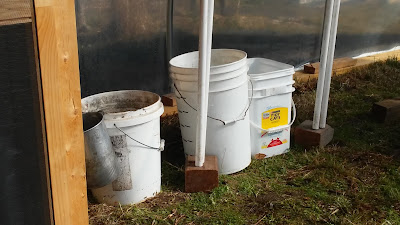 Into the garden beds, I sowed these items: spinach, two kinds of lettuces, radishes, cabbage, and onions and Swiss chard that aren't pictured here. 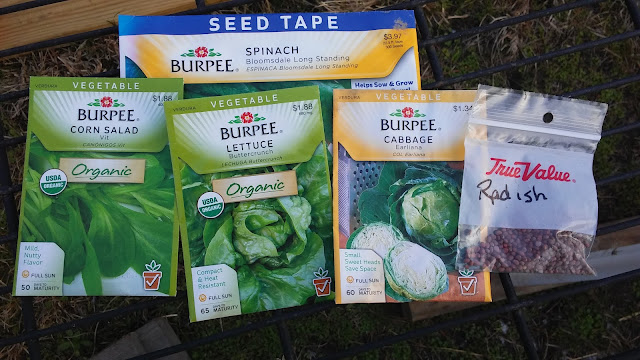 All the seeds above (plus more) were given me by my sister-in-law Anne. Wasn't that kind of her?
I put all these coldish-weather seeds into one long bed. The peas (which are already UP!!!!) are on the far end where those posts are. 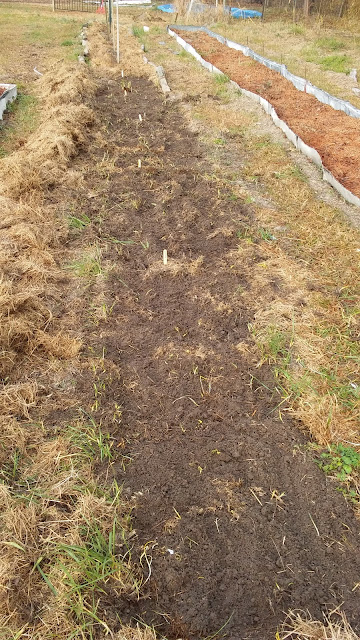 Did you notice the spinach package above, in "seed tape"? Here's what it looks like. 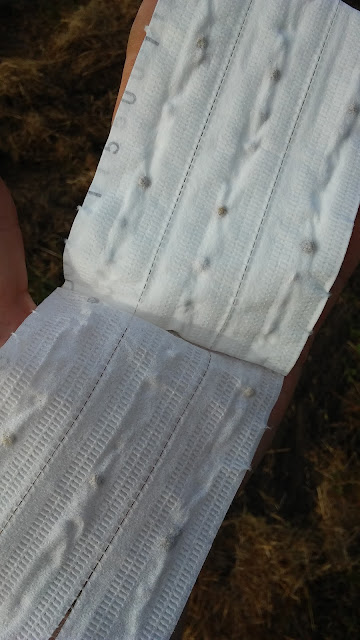 It's easy to lay into the bed, although I don't find regular seeds very difficult to do either. 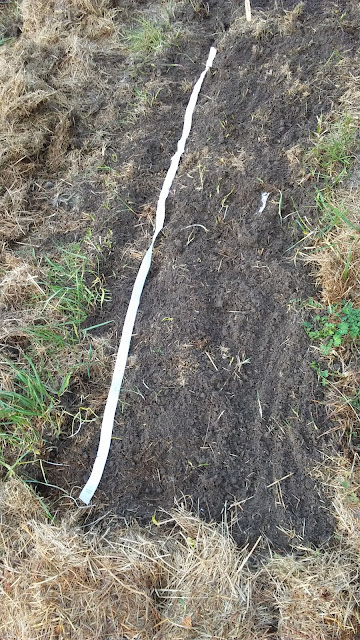 Here are a few of the peas that are already up in the sunlight. 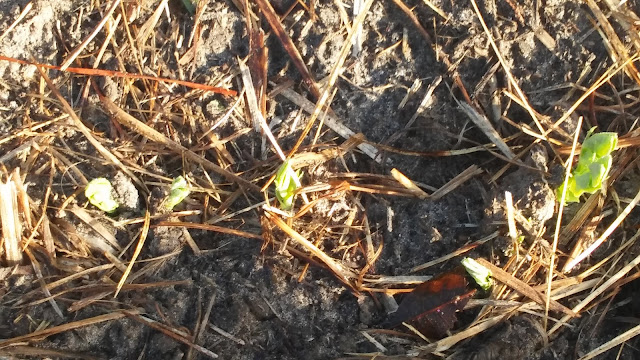 I made one more grapevine wreath today (which was a nice chance to sit down and rest), and I'll take three of them to the market in the morning for sale. They look quite nice.
I moved the two cayenne pepper plants into the hoop house too. I figure they'll get better care there, since I'll be watering at least daily, and they'll be moved into a garden bed in March. I'm itching to get my lemongrass plants into the ground too, but must wait until the real chance of frost is past. That's all for now!
Posted by M.K. at 5:20 PM