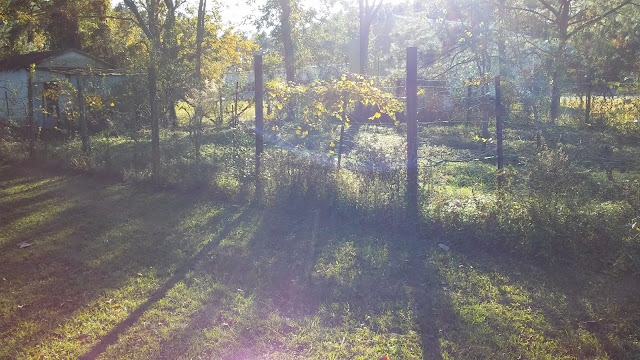 By Sunday afternoon Adam and I are tired from our weekend activities and ready for a good, quiet rest. I strolled through the gate toward the barn after my nap, fed my chickens some old waffles, woke Adam from his nap in from of a football game, and he and I meandered toward the garden. 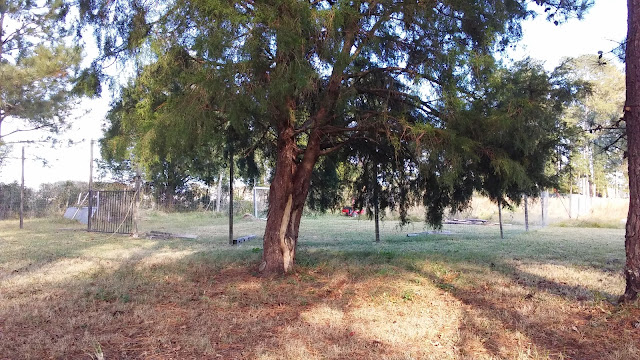 The garden is 3/4 enclosed, with a gate on the near end. On the way to the garden I noticed something strange messing about the edge of the pool. 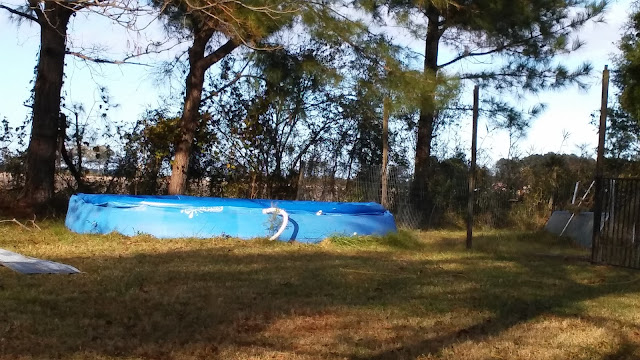 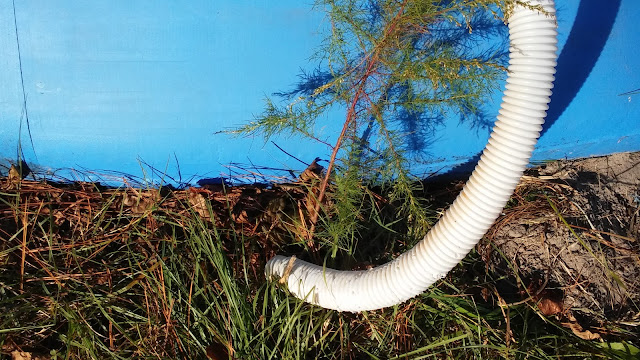 Do you see him yet? He's very green and has long legs. 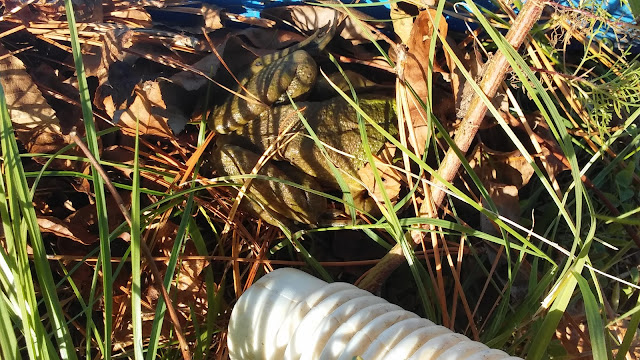 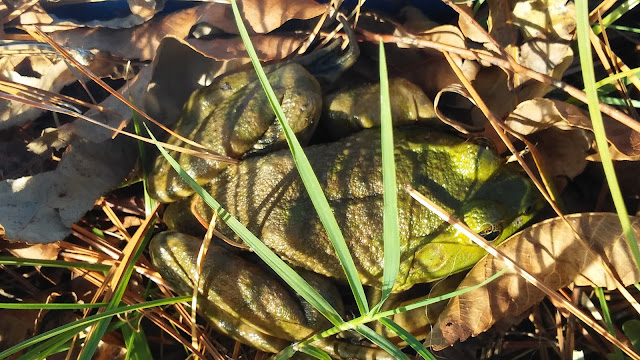 He's a real frog, not a toad (we have lots of toads here) with long, strong legs. When I saw him leaping around the circumference of the pool, I thought he was a weird snake. See his bulging eyes and mucusy skin? Also typical of a frog. But what legs! He sat a long time and remained utterly still while I picked the leaves away from his head and took his photo.
Into the garden, here is Adam's new raised bed! 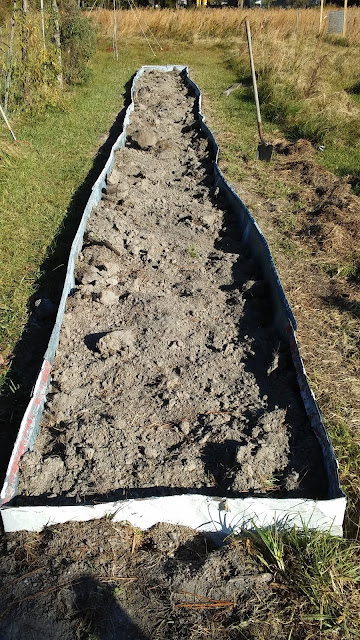 The sides are made from the old roofing on Julia's little building. 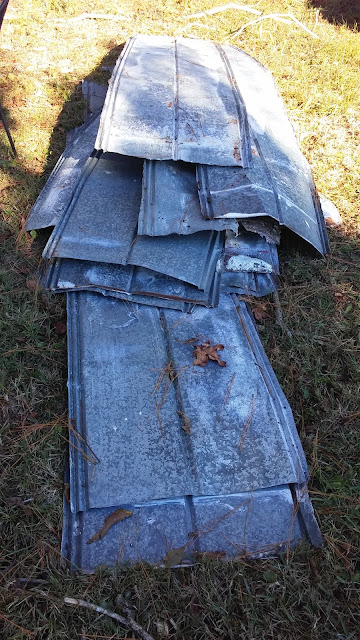 He hammered them flat, removing the ridge in the middle, and bending one edge over so it wouldn't be sharp and cut anyone. (His hands were quite sore after this work.) 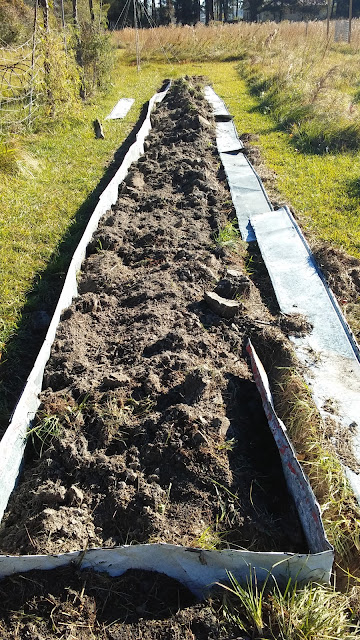 This was when he was in the middle of constructing the bed. The metal is in the earth, and the pieces are screwed together at the ends, as you see below: 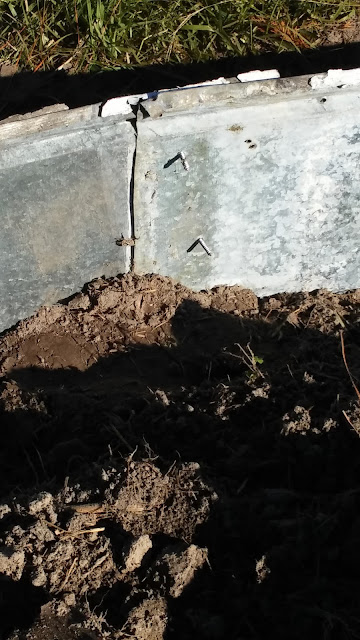 It was a lot of work, and that's not the last one -- only the first! He hopes these raised beds will keep weeds out better and will last for many years. This bed, the old tomato bed, is about 50 feet long.
As you can see below, he's generally kept the various shorter beds in the garden in line with each other, so now that the greenhouse is removed, he can extend them and make them into longer beds -- all raised like this first one. All were made with compost last spring. 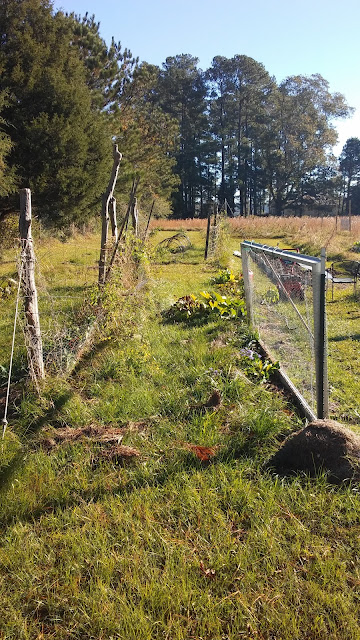 As I was gazing at dead plants, Adam quietly beckoned me over. "Come see what I found." 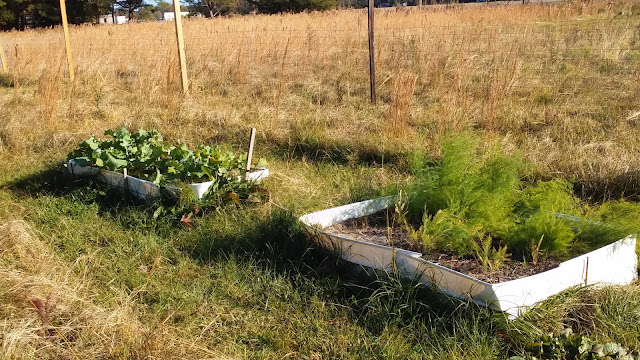 He stood in front of the lettuce/collard bed. What would you expect to find in a bed of greens? 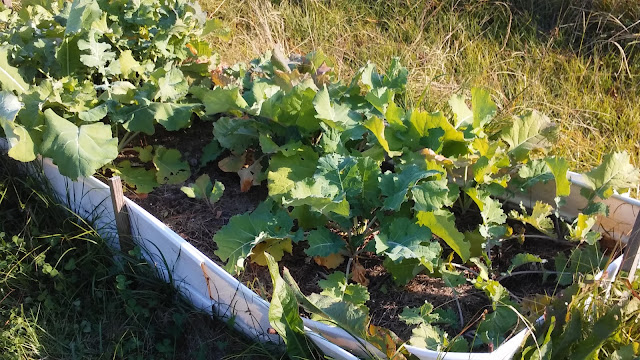 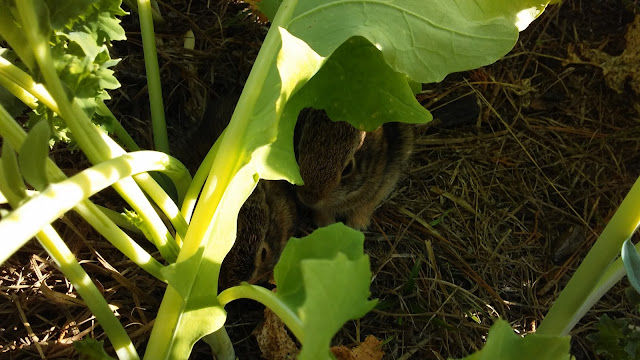 Baby bunnies! In my lettuce bed! And instead of being like Mrs. McGregor and grabbing my shovel and my pie dish, I was delighted and felt like royalty that these baby bunnies had chosen our lettuce bed to visit! 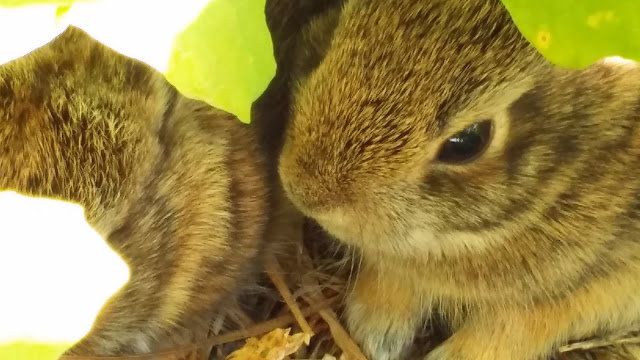 Aren't they sweet?? And all the farmers and gardeners out there are thinking, "She's clearly a newbie."
We didn't tell Ned.
They stayed quite still while I pulled aside the collard leaves and zoomed in.
So you see, Beatrix Potter visited in the form of Peter Rabbit and Benjamin Bunny. And Kenneth Grahame visited in the form of Mr. Toad (err, Mr. Frog?) I would write of Rabbit and Mole, but I fear Mole has already been despicably treated by Ned the Black Labrador who dug up a large area under the pecan trees excavating for Mole's extended family. And Ratty is this very minute planning how to infiltrate the chicken coop this evening via his many tunnels and holes there.
Speaking of chickens, I picked some wild strawberries for them. They gobbled them up. 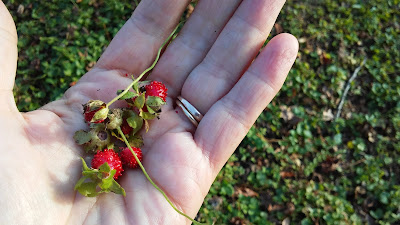 Ruby Footpecker is my favorite hen, and I don't mind saying so. 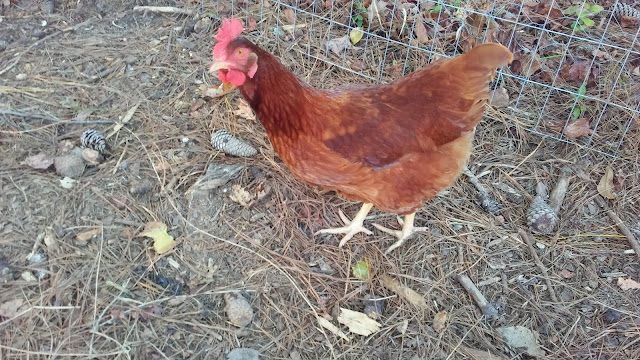 They're still laying well since this is their first year. 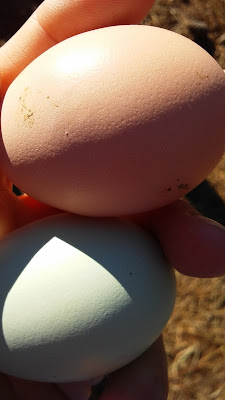 The far end of our pasture is in a rather wild state. Ned bounds through these grasses, and Adam scythes them twice a year. 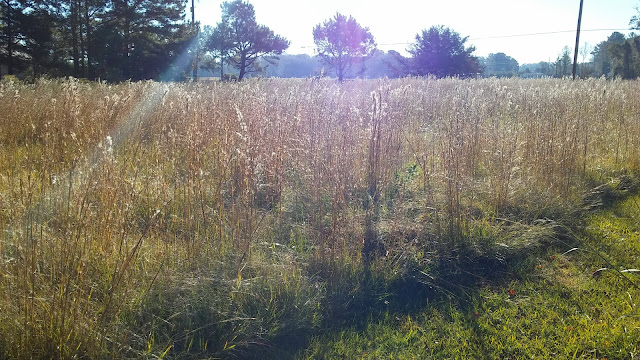 The grapevines are nearly naked now. We're unsure what to do with them. They may never bear well because of the limited sunlight they receive. We may start new grapevines elsewhere. So long from the quiet farm. 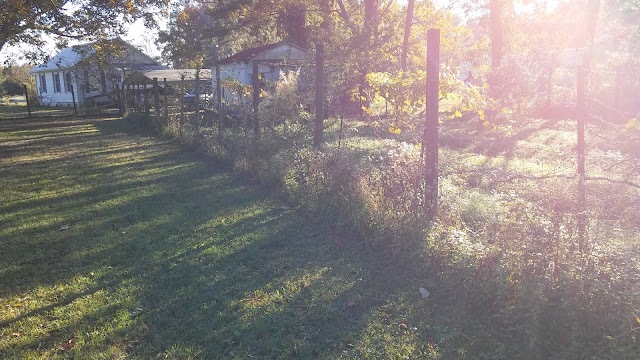