Today's high is only 94. (It's been higher, nearly 100.) The heat index is 105, and there's a heat advisory until this evening. A heat advisory pops up on my accuweather alert nearly every day. So ... farm work is hot. Adam is up early; I'm not an early bird. But this morning even I was up-and-at-'em at 7:00. I was determined to find a way for Rooster Cogburn to be outside again. 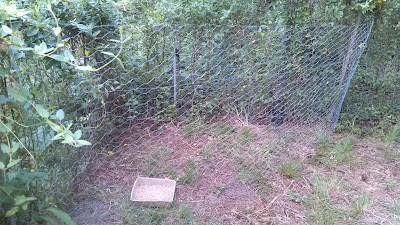 Adam rigged up a corner of the chicken yard with some fencing to keep the hens away from him. He was happy to be outside again! 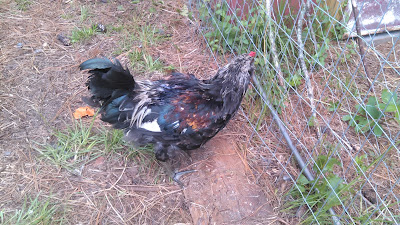 He has food and water and some corner shade. He's trying hard to wiggle through the fence, but it's been a couple of hours and he's still unsuccessful, so I think we're good! 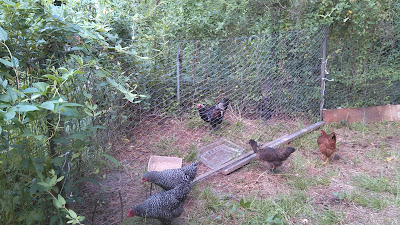 I strolled over to the greenhouse to see my few seedlings coming up. Asparagus is looking good: 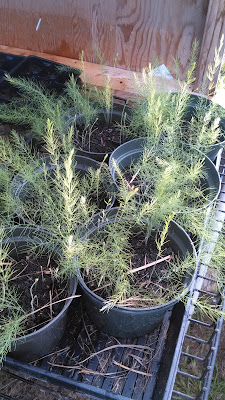 Adam's new asparagus bed is about 3 feet by 5 feet: 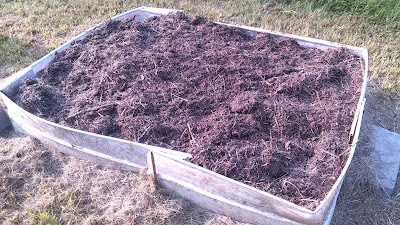 The strawberry bed (we have no strawberry plants yet) is 2 feet by 6 feet. 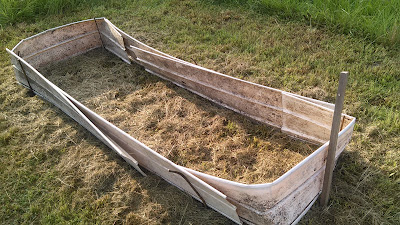 Both will be filled with a combination of worm castings (our worms are doing fabulous!), compost, and a little sand. It's gorgeous stuff -- crumbly, loose, dark. 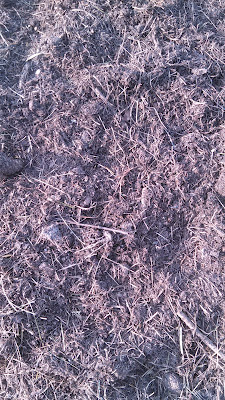 Adam is very eager to begin his compost-making this fall. He loves making dirt. Last fall and winter I watched him, day after day, and wondered if he was just using it for therapy. And although he did enjoy it, and it did soothe his soul, it's also extremely useful on the farm to have a big supply of beautiful dirt.
I used that dirt to begin some yellow squash and zucchini seeds (left and middle) and more blue lake green beans. 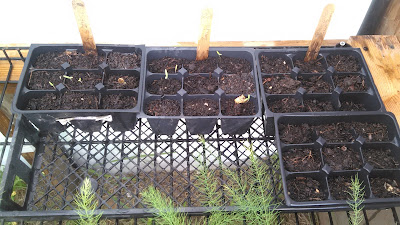 I attempted starting some annual flowers from seed. Only the coleus did well, and it's massive. I have it in rectangular pots on the front porch. 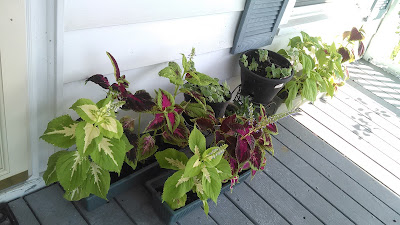 My pretty eucalyptus tree is doing  so well. Oh, and that round thing in the middle of the photo is a rose hip on one of my bushes by the front porch. I need to figure out when and how to prune them. They're very leggy. 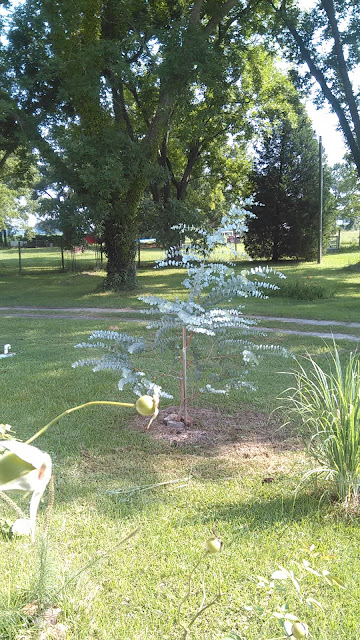 Adam drove the truck up with a load of compost mulch for the herb garden. Several herbs have given up the ghost for the year; it's too hot. But some are thriving, notably the lemongrass (far left), basil (right), thyme, oregano, and some others. 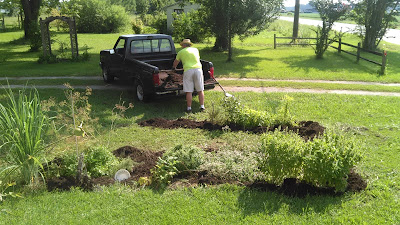 It's 10:15, and Adam is done for the morning. He came inside, sweaty and gross. He also did a little mowing and compost work in the veg. garden. And we picked cucumbers and tomatoes and the put the latter in the dehydrator. His big dehydrator is coming along. The "plans" he got for it online from NC State University (oops!!) Appalachian State were just plain awful. He says the best they did was give him the right shape - haha! So he's having to make the final portions himself -- the doors and drawers and racks. But until late afternoon ... rest.
Posted by M.K. at 7:30 AM