We're hibernating. We're staying indoors because the weather outside is frightful! It's 97 degrees with an extreme heat warning and a heat index of 115 degrees! Yikes on bikes (as Peter would say)!!!

But unlike the bears, we can't sleep the summer away. So this afternoon we started an indoor project: refinishing the dining room floor. Oh my! Do you remember the nasty green carpeting that was in this house? 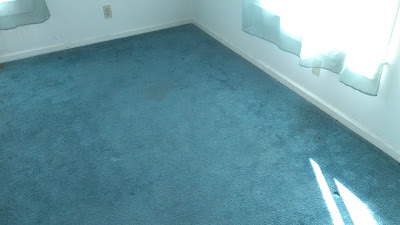 Old and stinky. The linoleum floor underneath it in the dining room was equally ugly. 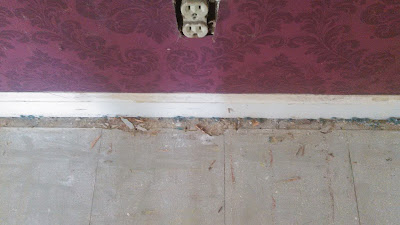 Thankfully, nobody was trying to force me to pick between those two equally evil floors. We were dreading this project because we've pulled up lino before, once in a bathroom in Mississippi and once in a kitchen in Alabama. Underneath was a thick sticky black adhesive, nearly impossible to remove. It was back-breaking work involving horrible chemicals and a massive floor sander. We lived with the ugly lino for nearly a year. But ... today was the day! And how happy Adam was to discover that this linoleum was quite easy to remove. 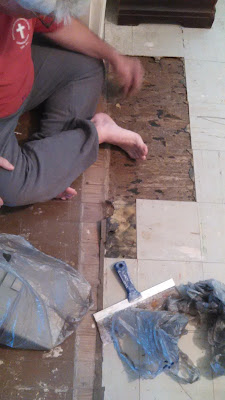 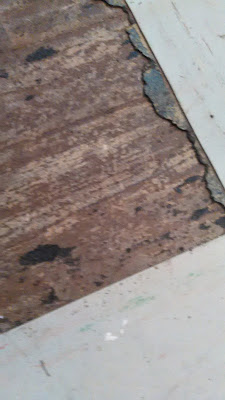 Instead of the black adhesive, evidently they used a kind of roofing paper between the pine boards and the linoleum. This paper sticks to the wood in a few places, and you can see where its black glue has adhered a bit. Adam pulled it up in big pieces, and in a matter of minutes we had lots of wood showing.

In one corner of the dining room there's a beveled wall. Behind it is a chimney and some sort of fireplace, we guess. All four rooms that meet at this juncture have this type of corner. 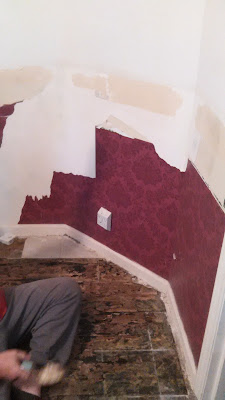 The linoleum didn't go up under the baseboards in the rest of the room, but it did go under the baseboard in this one corner, telling us that the fireplace was covered up after the lino was put in.
Adam was so tickled, that we drove to the hardware store, bought a paint scraper (for stubborn black spots), a sander, and sandpaper replacement pads. 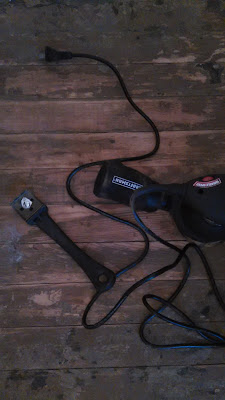 He's been scraping away all afternoon.
This part hasn't been worked on yet. It's near the fireplace corner, and the black paper was much harder to remove there. We think perhaps the heat from the fireplace made it stick to the floor. 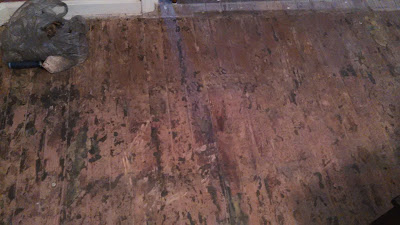 Here's where he's been scraping. Doesn't it look good? I love wood floors, and I don't need them to look brand new, picture perfect. I mostly like them to look like wood and have a sturdy polyurethane coating for protection. 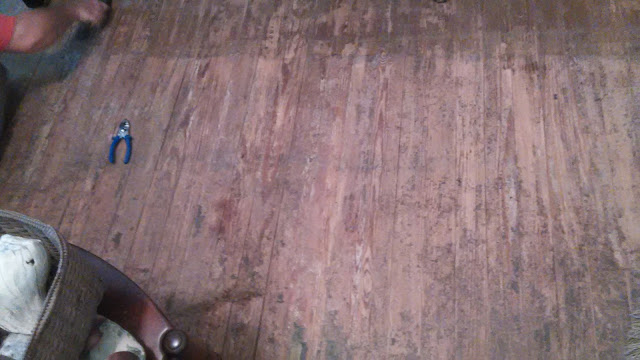 Here's the line between the dining room (bottom) and the living room (top). They must've had French doors here with a threshold. We'll need to do something about that leftover threshold stripe. 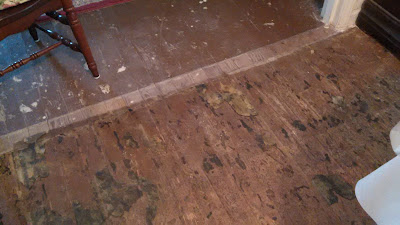 In both rooms the floor was painted brown around the four edges, like a mat on a picture. I don't necessarily want to take off that paint. I feel it's part of the house's history, at a time when that was a fad. We'll have rugs down in both rooms, so I don't know how much that wood/paint delineation will show, but it's an interesting feature to retain. And you see the white paint splatters on the living room floor? I'm sure whoever did that thought, "Nobody's ever gonna see this wood floor again, so what does it matter? Who needs a drop cloth?" Phooey.

So much for today's hibernation! I don't know how people survive this who have to work outside. And the poor plants and animals! It's survivable in the shade, but only barely. Y'all stay cool out there!
Posted by M.K. at 3:01 PM