Hello, all. I promise I have not dropped off the planet. Busy week last week. 'Tis the time of year for pretty fall weeds to bloom on the farm: 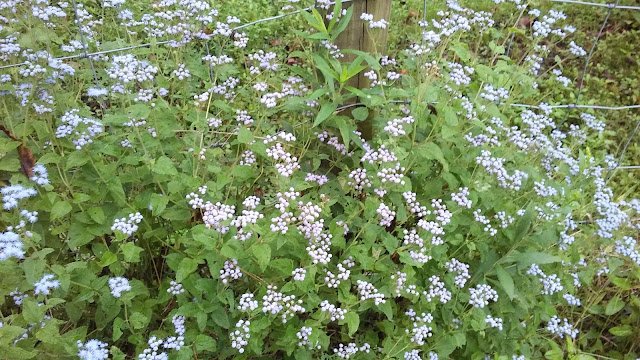 Ned has been sick. We thought he'd been snake-bit, but instead he'd scraped his chest on some sharp farm object, developed a bit of an abscess, felt quite puny, visited the vet, been on meds, and nearly recovered. He loathes being on a line instead of free in his field. 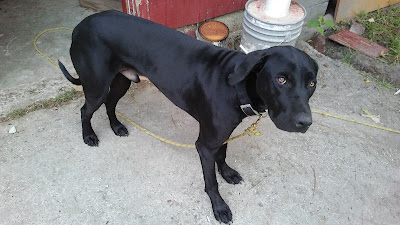 Our cayenne pepper plants finally decided they would do something with their lives. 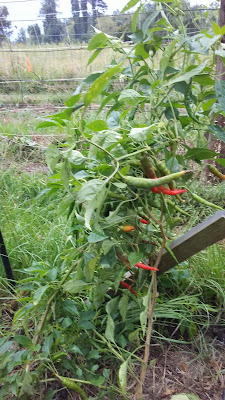 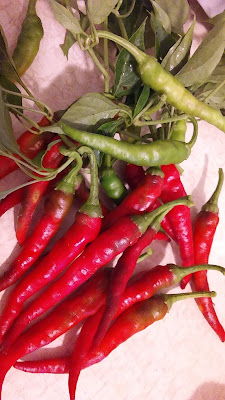 Aren't they pretty?
And we have a couple other not-so-fiery pepper plants that are performing. 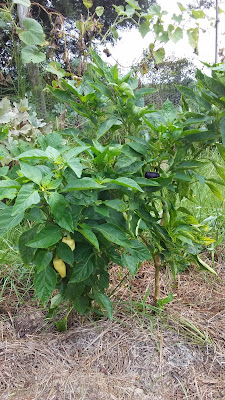 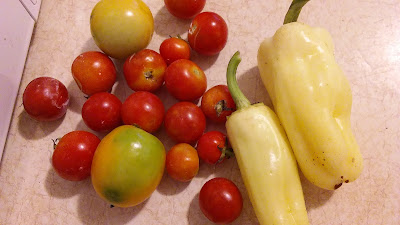 The white peppers and some deep black/purple ones come from those two plants.
Did you see those tomatoes up there? Yep -- we still have a handful coming in!
We have two plants still bearing: 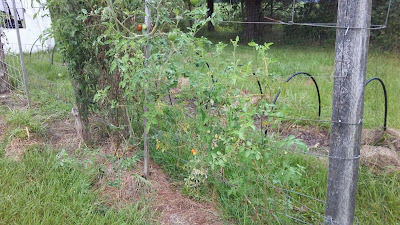 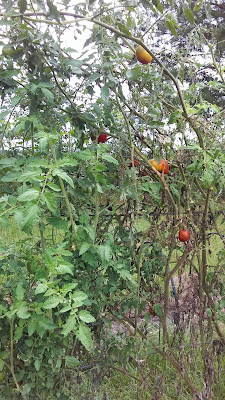 Its fruit rots on the vine. Meh. Not planting that one again. 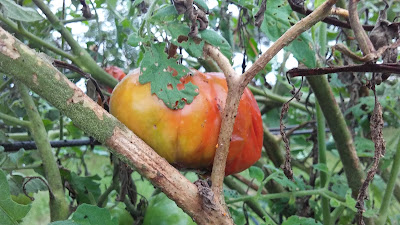 This other one, however, is doing well. Its fruit is good. Not too shabby for Nearly October! And considering that my first tomato was eaten on June 1st -- four months of tomatoes! 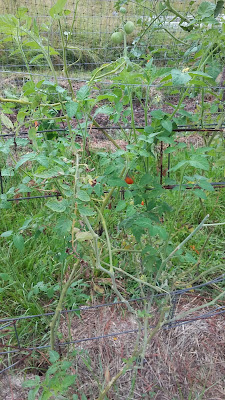 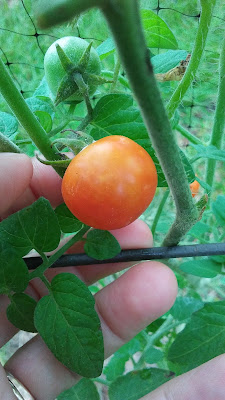 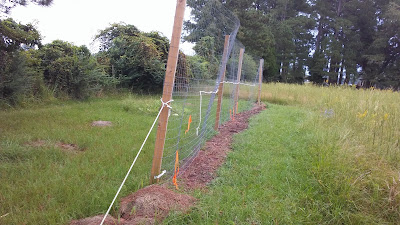 He used leftover peas from spring in the bed above, and only two plants came up.
But in the bed below he used new Wando peas from the farm store,
and they've come up much better. 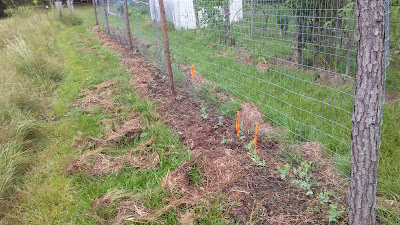 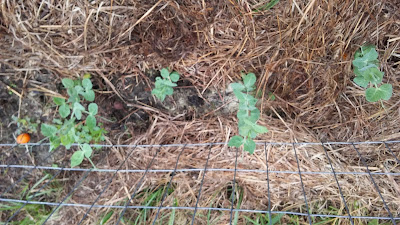 Our asparagus is doing well for its first few months!
I love it when things I started in the greenhouse actually succeed. 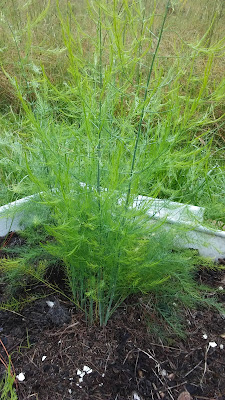 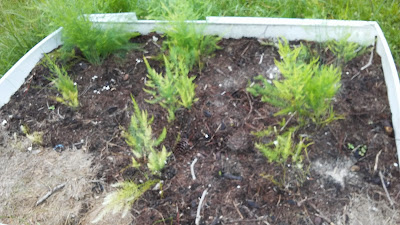 This is a crazy volunteer gourd plant on an old cucumber trellis. 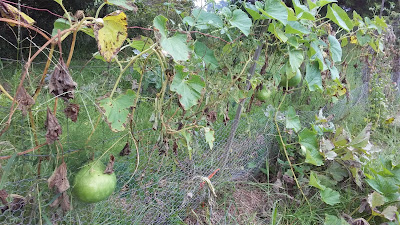 I'm hoping since these gourds have good ventilation and sun, they will ripen and not rot. 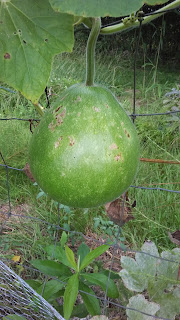 Adam also put in some lettuces and collards for the fall.
Some are in this long raised bed. You can just begin to see them. 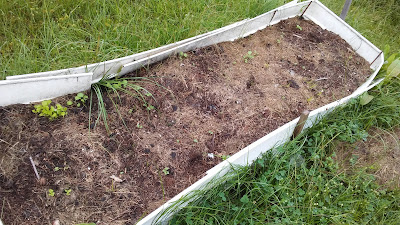 These are in the old hoop bed where lettuces were before.
I think we'll have some autumn salads! 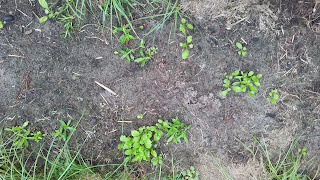 We've had a bad watermelon year. All of them so far had blossom end rot --
low calcium in the soil, we think. These last two look good so far,
but Ned will probably eat them when he can roam around again. 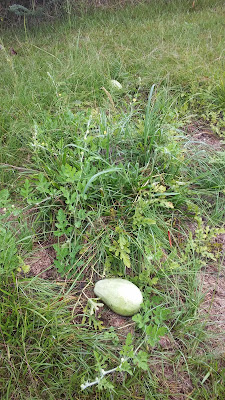 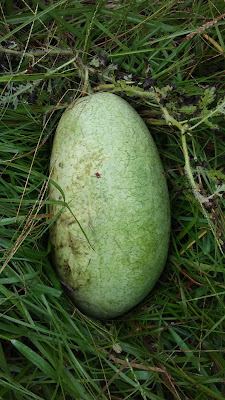 We also valiantly tried a few more bean plants. We had no success with beans this year.
But these couple of vines seem to be healthy.
However, I'm not gettingmy hopes up about actually eating beans from them. 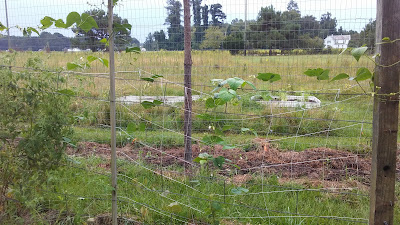 Beans have disappointed me too many times before! 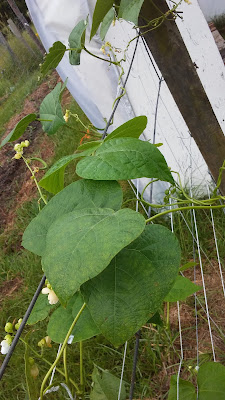 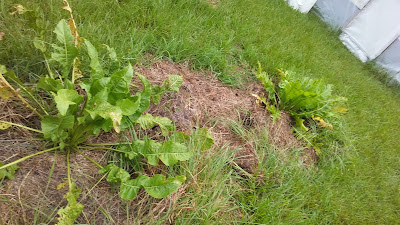 Adam had some dirt in the back of his truck -- good, compost dirt --
and he dumped it out on this piece of plastic.
A few days later we noted that many little
squash/cucumber/gourd seedlings arose from it. 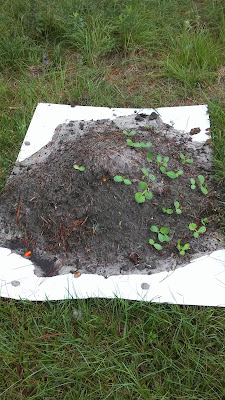 It is too late in the year for you poor little things! We will not let you grow and vine your way around half the yard.
The chickens are good. The bees are good, if not overburdened with honey stores this wet year. The worms got too hot in August (didn't we all?), and their numbers declined sharply. We will replenish our population of worms.
That's it from the farm!
Posted by M.K. at 6:01 AM