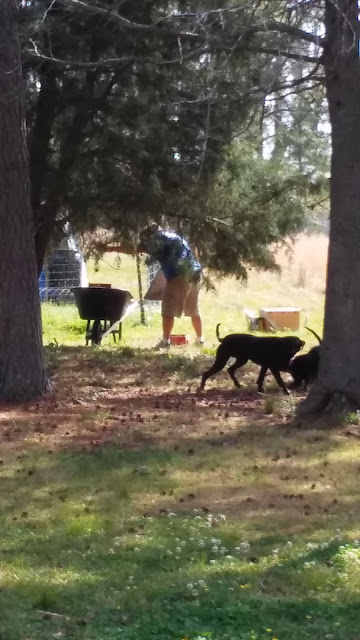 On my way to the garden this morning, Adam warned me away. "We've got a bee swarm," he said. It's in that cedar tree he's bending next to.
So I puttered in the herb garden for a while, and he encouraged the swarm into a hive box. 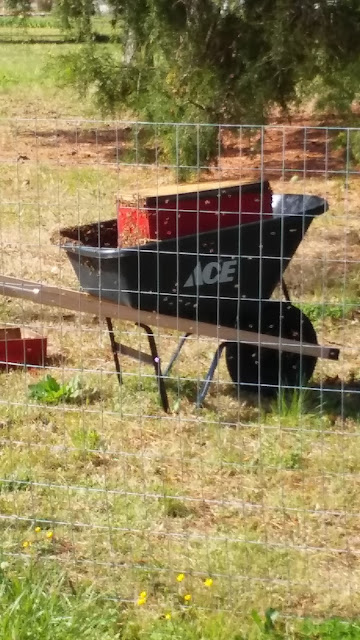 I thought it was quite clever of him to put it in a wheelbarrow, so he can move it easily when he needs to. 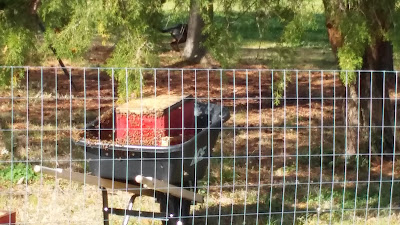 He had his bee gear ready, and he wore his head gear/netting this time, but no other protection. He was not stung. 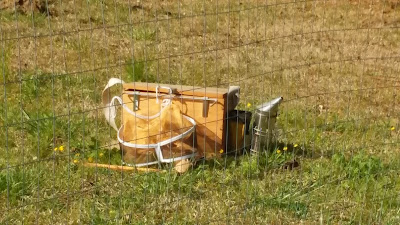 This tree. What can I say? It's simply stunning. When I stand beneath it and look up, I wish I could lie on soft fescue grass and gaze into its blooms for days on end. Minus the electrical wires ... and the plastic ring around the base. 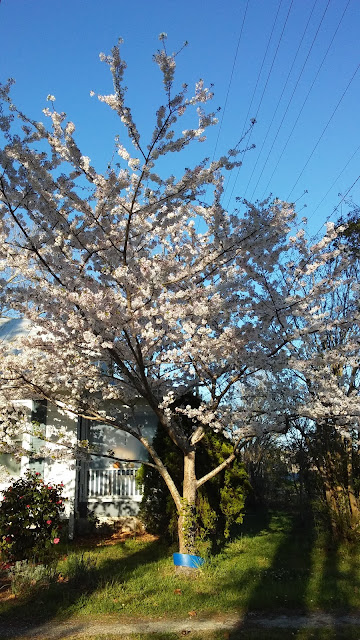 Its bark is shiny silver. 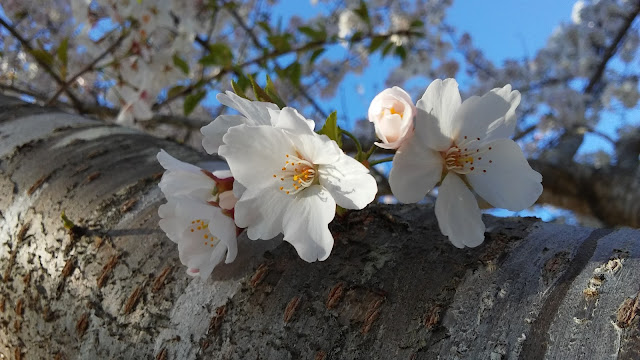 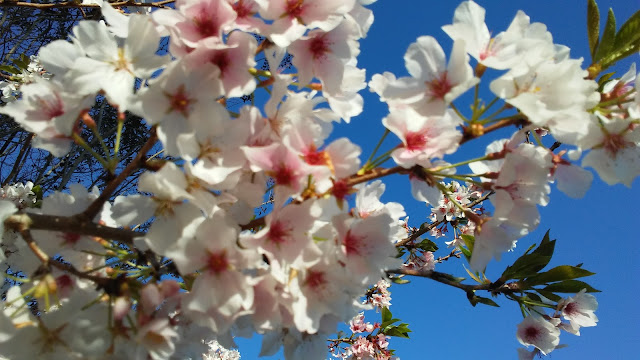 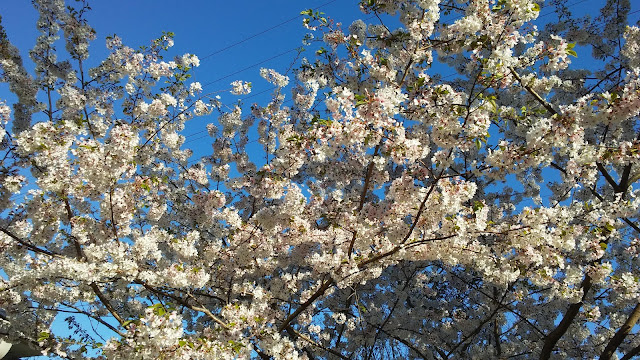 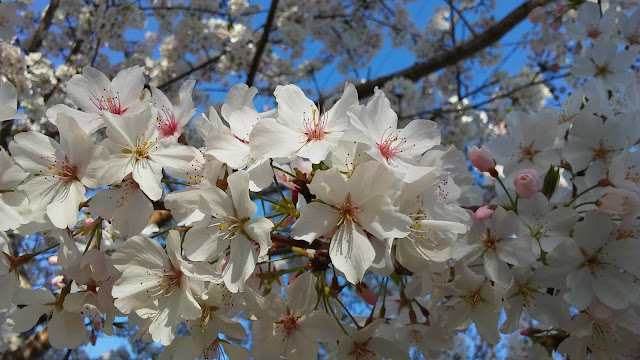 The wind has been strong these two days and its blooms have fallen like snow. 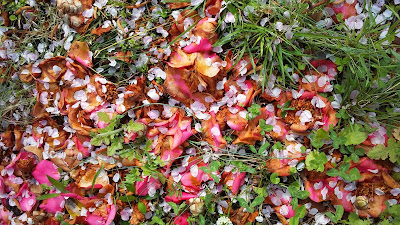 They blend with the brown, tired camellia petals on the ground, which have bloomed since January.
Adam dislikes wisteria, a vine that climbs and strangles trees. But it's so beautiful!! We have it in our pine trees. 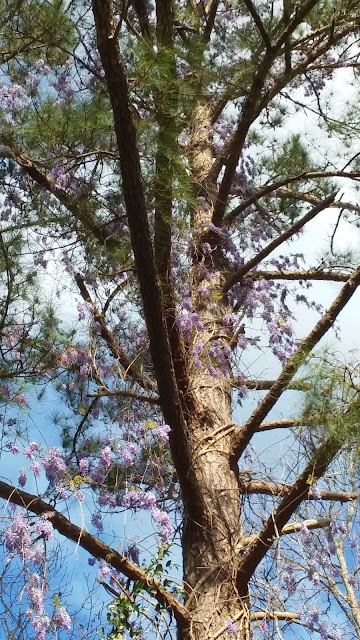 Its blooms resemble a cluster of grapes. 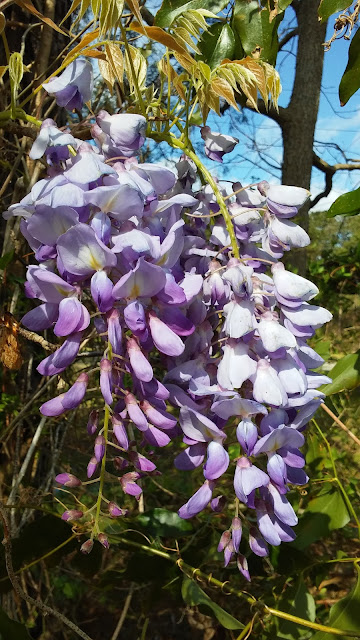 My Painted Lady fern is happy. 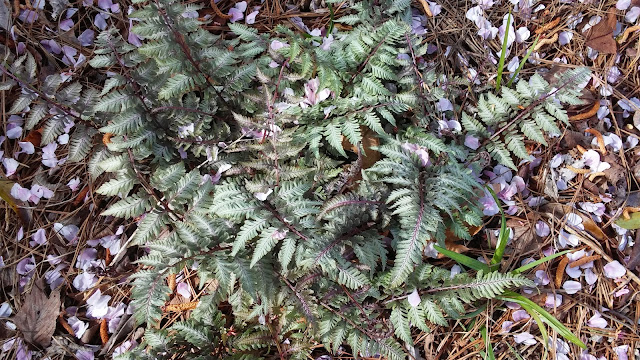 My Artemisia is doing very well. 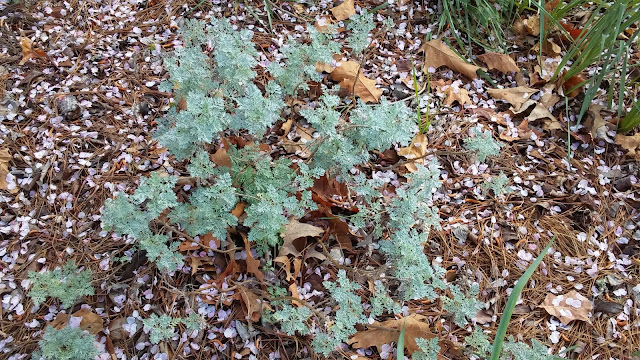 And hooray!! My earliest hostas are UP! 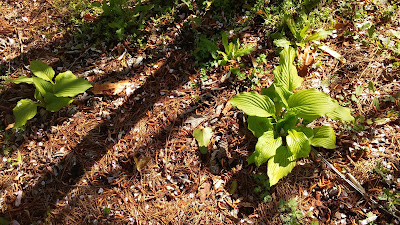 I realize I'm afflicted with a common gardener's malady. I have Tomato Seedling Addiction. Right now, I have 62 small tomato plants transferred into their larger pots. I'm not even half-way done yet. 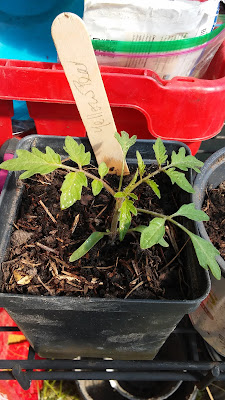 They generally all look like that.
So once again, we will have over 100 tomato plants. We don't want to be overrun as we were last year, so I plan to give away lots of plants. Lots.
And because I used Adam's homemade compost for my potting soil (which is wonderful stuff, btw), and because we threw literally hundreds of rotting tomatoes into the compost last summer/fall during the height of the season ... and because those seeds were then transferred into my potting soil ... I can't absolutely guarantee that the tomato plants I have growing so healthily are TRULY the variety I think they are. I may have put two Brandywine seeds into that little cell of potting soil, but who knows if there was a tiny Chocolate Cherry seed hiding in there too? Argh. Live and learn. Next year Adam will bake his compost and kill off any residual seeds that might corrupt the potting soil.
So ... this will be the year of the mystery tomato plants!
Posted by M.K. at 8:57 AM