I went sloshing out in the field this morning wearing these: 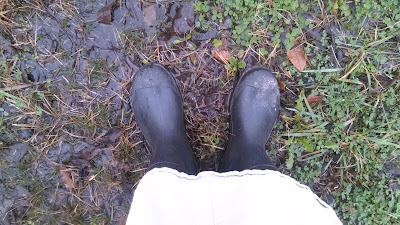 Lots of rain last night, and the ground is saturated. 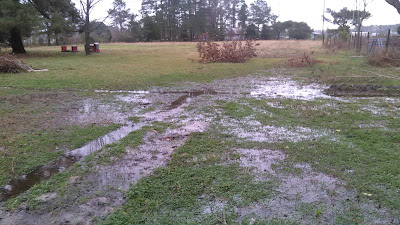 Adam has yet to get water pipes into some of his trenches, after all this time, because they have never yet been dry enough. 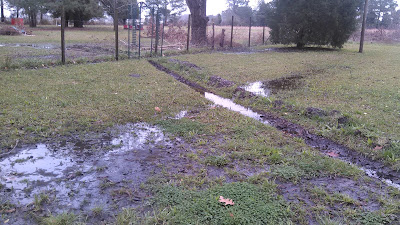 The rows in the winter garden are full again. Those poor greens, how they do soldier on! 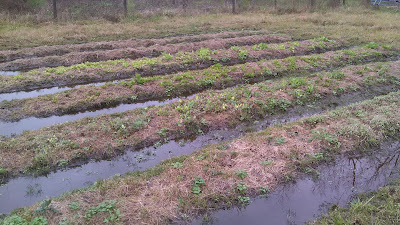 It's Christmas Eve and it was 85 degrees this afternoon. Thus is the South! The bees were flying, but we really wish they wouldn't, as there's not much for them to eat right now, but they burn energy (i.e. use up honey stores) when they fly. 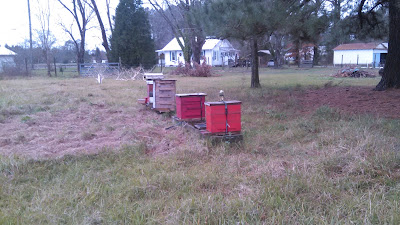 Adam's trying hard to get his compost wet. You wouldn't think it would be hard with all this rain, but the rain only seeps in a little ways, and the compost remains dry inside. So he has to turn and turn it. 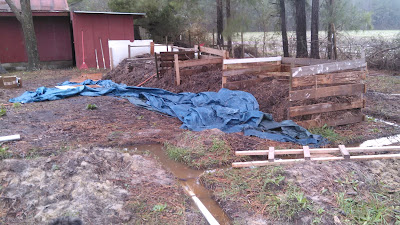 From the bottom of his first bin you see dark soil beginning to form. 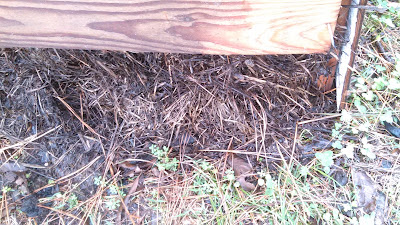 Maggie loves the outdoors. She leapt onto the burn pile happily. 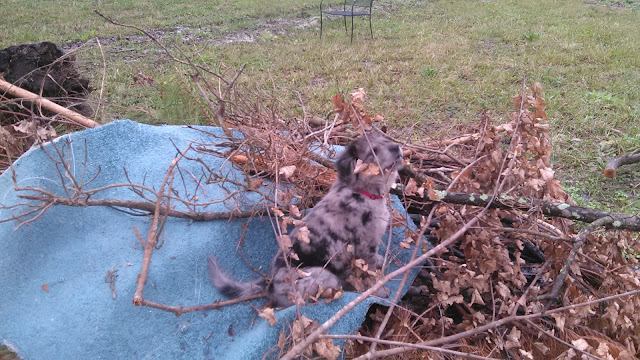 Adam still works on his water system. Here are the pipes he's removed from nearer the house (where it's wetter), to the back of the property where it's drying. A little. Not much. 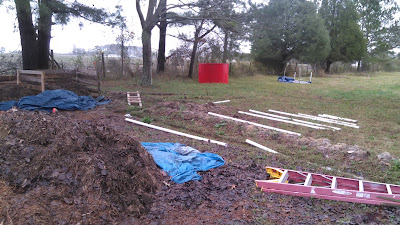 He got his four barrels up on the backside of the barn. He rebuilt the table on the left and built the one on the right from scratch. 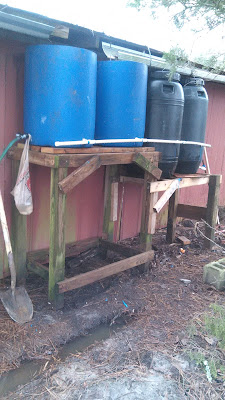 Barn roof water flows into the gutters and into the blue barrels as before. 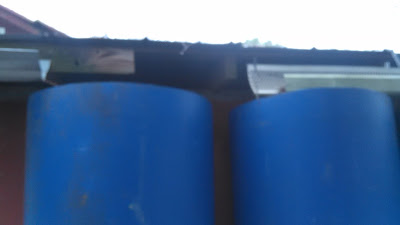 He put in some PVC lines to direct the rainwater ... 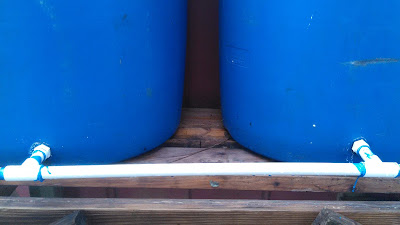 And attached that line to the new black barrels too. 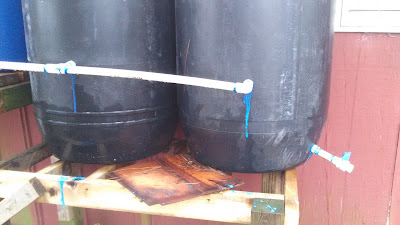 And attached a spigot to one black barrel. A hose attaches there. 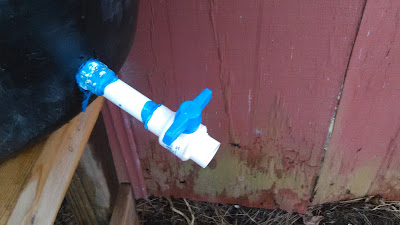 He was excited about all our rain last night and went back to the barn first thing this morning to see all the rainwater he'd collected. He'd found an old toilet float in the barn and put it into one of the barrels with its little stick pointing up, so he can easily see when the barrels are full.
He was rather disappointed this morning though. He's accidentally left the spigot open. All that rainwater came into the barrels and right back out again. All in one place. Needless to say, the area below the barrel tables was quite wet this morning. 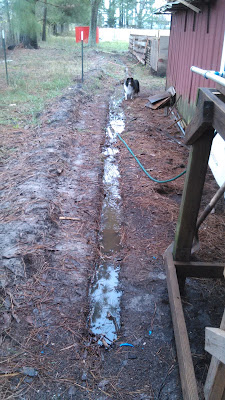 I think this weed is sorrel. In spots where all else is bare, healthy tufts of this herb thrive anyway. 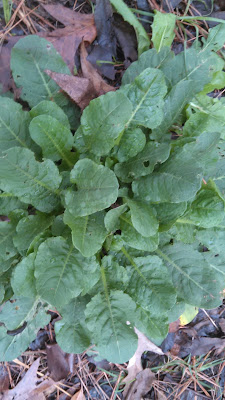 Adam and Peter have been working on the orchard, and Adam's pulled out lots of grapevine. Here's a stretch of vine that's not yet been pruned and pulled out. 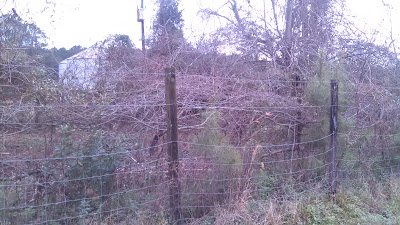 Here's a portion with vines removed but a few scrubby pines and wax myrtles remain. 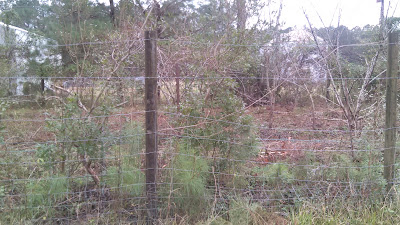 Here's the front of the orchard where the most clearing has happened. There's little remaining except the pruned grapevine stumps and a line of fruit trees down the middle. We're unsure what they are exactly. 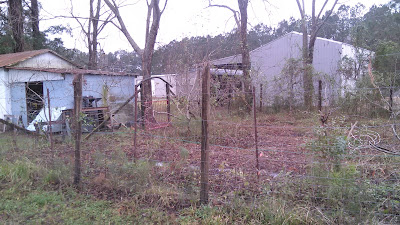 The mass of grapevine Adam's pulled out for me to work with. 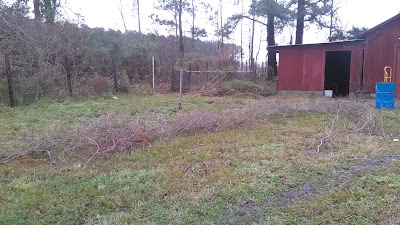 Our pecan trees continue to drop nuts, but I think we're done collecting them for this year. It's been so very wet, and they sit in the soggy mud. It doesn't do them good. We'll hope for a dryer fall next year. 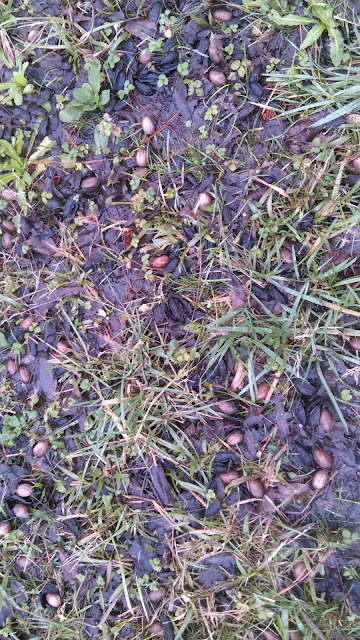 Merry Christmas to everyone from our little farm! We'r'e eager to see what the new year will hold for us.
Posted by M.K. at 3:51 PM