As you know, I make a product called Salve Plantain. It's fabulous for burns and minor skin abrasions. It's also good relief for minor cases of poison ivy. But my family are not fans of my 'green goo,' and they turn up their noses at what Adam kindly calls my "prairie medicine."
But Adam is severely allergic to poison ivy, and when a man is clearing as much weed, vine, and brush as he is, he's bound to catch a bit of that nasty rash. He did, Wednesday. In spite of correct clothing, immediate hot showering, and immediate clothes washing, he caught it all around his lower legs. Inevitably he will need a shot at the doctor's office. His poison ivy always gets that bad. By Wednesday night it was already seeping and oozing.
But Adam's doctor moved, and his appointment for today was postponed. Oh no! Late Wednesday night, after I'd gone to bed, he scoured the internet for home remedies and solid advice. And you know what they told him to do. Oh yes. Plantain!
It must've been as hard for him as for Naaman to wash in the Jordan, but he did it. He took a blazing hot bath, and then he went outside in my lovely plantain patch ...
Oh, didn't I tell you that I'm cultivating my very own big patch of plantain? No?
Adam has told me it looks weedy. Whatever.

But he gathered big handfuls of straight plantain leaves, ripped them up and crushed them, and rubbed them vigorously all up and down his lower legs.

The next morning he told me his poison ivy has dried up. It's stopped oozing and is scabbing over. I can't tell you how amazing that is! His poison ivy never, ever does that on its own. He even used the word "miraculous," which is something, coming from a pastor.

And I'm feeling ever so slightly vindicated. :) 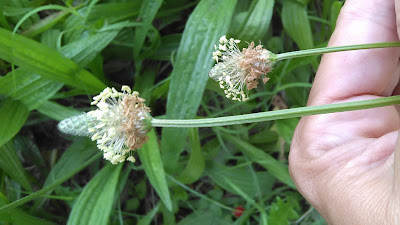 Email ThisBlogThis!Share to TwitterShare to FacebookShare to Pinterest
Labels: plantain