In the past few days, the peas have really died off, and the tomatoes have started coming in.

It feels like spring is past and summer is setting in for the long, hard road ahead. 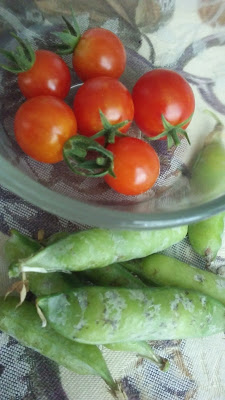 Our tomatoes will be a bit mysterious this year. Some of the plants will be hybrids from last years stray seeds that ended up in Adam's compost. But right now we mostly have the tiny Matt's Wild Cherry tomatoes in the dish above. They're delicious. Soon we'll be overrun with them and selling them at the farmers' market.
Early blight still besets some of my tomato plants. I hope I don't lose many of them yet.
Adam ordered sweet potato slips in the mail. It's a bit on the late side to be putting in sweet potatoes, but we hope they will do fine. He tilled up a nice mounded row with loose soil. 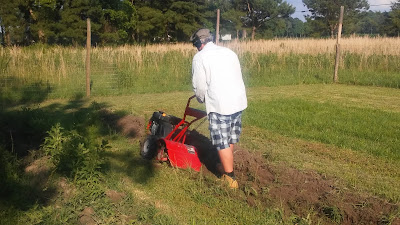 As you see in the photo above, Adam keeps a nicely mowed, fenced-in garden area. But outside that fence is about another 2 acres of pasture in high grass that he scythes twice a year. We aren't doing anything with that piece of our property yet. The dogs enjoy hunting mice out there.
I'm still taking herbs to the farmers' market on Saturdays, and selling a few. That's satisfying. 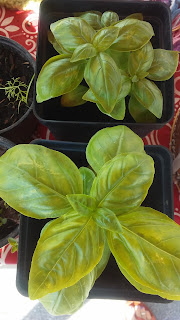 My loofah plants are taking off! 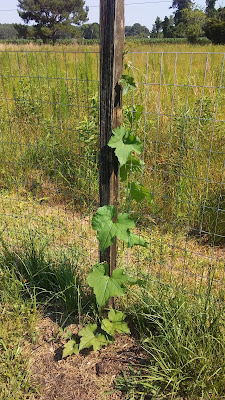 I'm quite excited about loofah. I tried to grow them before with seeds from a friend, but (I forget why) it didn't work. I want loofah for a bathing sponge, but I also like putting it into my soaps. I can't wait until the fruit comes! I'll take you through the whole process.
Our watermelon plants are looking great. 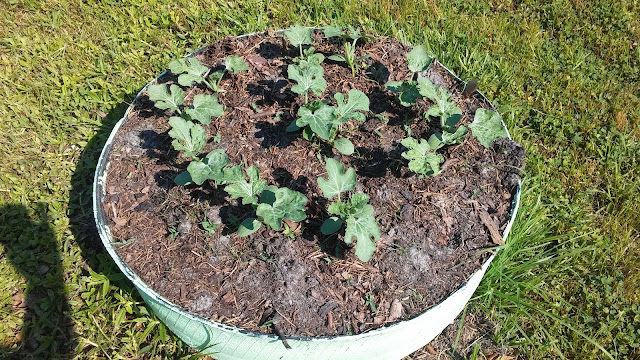 I can't wait until they are long and spilling out all over the grass. Maybe we will get some melons this year since Ned can't get into the garden to eat them.
There are down sides to Ned's absence from the garden. He is our resident snake-killer, and he does take that job very seriously. Now the snakes all know they should head to the garden, where Ned's not allowed. Yesterday he found a large (4 ft?) Yellow-bellied water snake near the barn. He was throwing it up in the air and worrying it to death (literally) when Adam noticed him. The snake looked thick and muscly to Adam, and he didn't recognize the coloring (a dull red body with a bright orange/yellow underside), so he killed it. Plus, if he hadn't, Ned would have.
We still have a resident garden snake. I've named him Benedict. The resident bunny rabbit, who is quite unashamed to nibble in the spent lettuce bed and barely hops away from me, is called Benjamin only because I can't name him Peter. He is in no danger from Benedict, who is a simple rat snake and whose mouth would never fit over Benjamin's ears. Last time I saw them both, Benjamin made me jump and scream when he hopped. I'm always on the look-out for Benedict (One does not want to reach for cherry tomatoes and meet a fang instead.), so he rarely surprises me.
Still, if Benedict is actually a Benedictina (??), I don't want 16 baby rat snakes slithering around the garden. I kind of wish Ned could go in there, hunt him down, dispatch him quietly, but leave our watermelons unmolested. He can't help he has a sweet tooth. 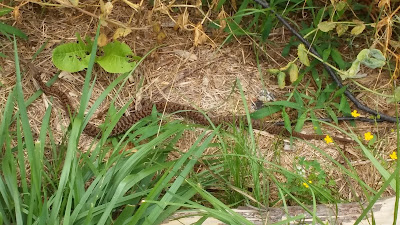