I'm a kitchen woman, myself. I want the kitchen looking cozy and homey before any other room.
Today I put things on the counter -- stand mixer, food processor, canisters, coffee fixin's, etc. I put a couple of cutie things on the windowsill over the sink. 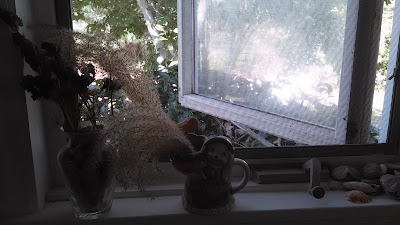 That was about the happiest moment of my day, setting that vase and that pitcher there. For weeks, we have gone from doing one urgent thing to the next, with almost no time for fun. I want to nest, you know? Deconstructing a house is ugly work. The rooms echo. There's nowhere to sit, nothing to eat. And we've deconstructed without reconstructing -- our boxes and stuff are in the out-building; our furniture is in the garage.
But this morning ... the piano arrived! It will stay in an odd corner of the dining room, covered with a rug, until the time when its wall is ready for it. But it's in the house! 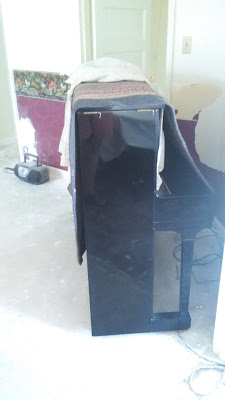 We finally ran out of room in the garage. And honestly, since the contractor is done in several of the rooms (except they were a frightful mess and the floor was deep in drywall dust) -- I didn't see why we couldn't move some furniture into the house, instead of moving it twice. He's had the entire house as his work room for two and a half weeks, but it's not necessary. He was very obliging, and I helped clean up the living room a little. There's still plenty of that insidious white dust to clean up ... another day. 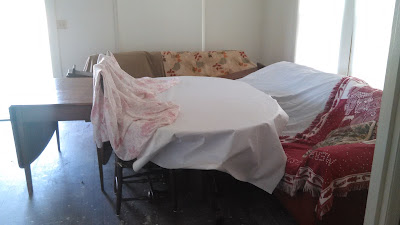 So Adam and I hauled two couches, two tables, and two chairs into the living room. I covered them.
The dogs came along this afternoon. They've been nervy and clingy. They leap in the van and won't get out. They hate being left alone. I tried to get a photo of them in the house, but this is the best I could do - haha! You get a view of the horrible floor though. 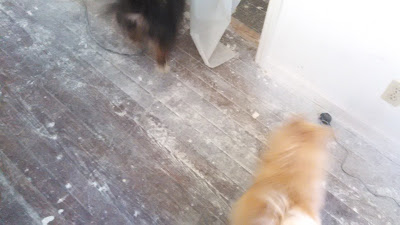 Tomorrow is church and then a 5th Sunday Sing at our church with other neighborhood churches from Oriental in the evening, so we'll be busy all day.
Adam is frustrated with moving his other three bee hives. Hasn't happened yet. The hives are very heavy, and he'll need help to lift them. He tried again this morning and tonight. Tonight one of the hives slipped a little and the bees went crazy -- attacking the tail lights of the truck like it was the Great Honey Monster. He's been stung more this weekend that he had in a while. So he's a bit discouraged by the failure to move these last bees. I tell him ... it'll happen. Eventually.
Posted by M.K. at 6:51 PM

Email ThisBlogThis!Share to TwitterShare to FacebookShare to Pinterest
Labels: bees, moving in